I don’t update this blog as often as I should;  the reason (I tell myself) is because I’m working on a laptop and my keying doesn't seem to work properly.

I was trained to key (Vehicle Registration Documents) by the Civil Service and I’ve never cottoned on to the flat keyboard.  Yes, I do have a proper keyboard that plugs in via the USB port but the other half has had a laptop malfunction (he cracked the screen – could have been a disaster but he’d forgotten to cancel the “30 days free” insurance when it went to “pay for if you want to keep it” and as a result was covered for the damage!) and has stolen the keyboard to run his old laptop which has a worse keyboard than mine…he says.

Anyhow, here’s some of what I’ve been busying myself with lately. 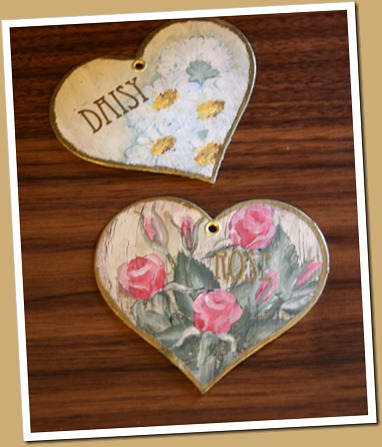 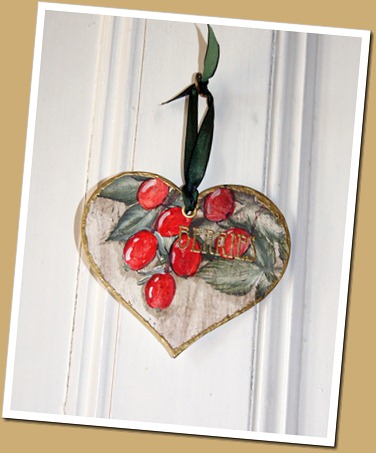 I finally got around to doing my IKEA mini-chest.  I like these drawers as they can be put into the chest either way round (if you follow me) so you can get two different looks!  I may change the small drawers in the top layers – perhaps. 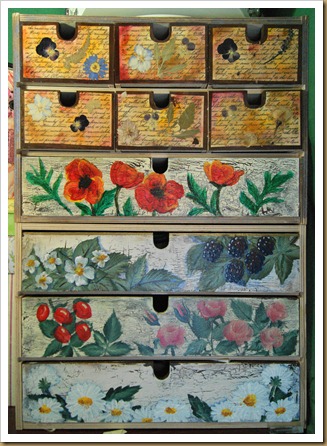 I’ve just ordered the new sets so no doubt there’ll be more to come.

However, just at the moment I’ve been doing some Tag art.  I love the Tim Holtz/Grunge/Vintage look and started off to practice some of the techniques in the Compendium of Curiosities.  Not sure what happened – I seem to have gone all nautical! I’d had some AMACO moulds of the celestial embellishments for ages and  recently saw the large seahorse and seashells moulds in the sugarcraft shop – I went in there to buy a small cutter for Friendly Plastic and there was a wall FULL of all sorts of moulds.  I’ve been playing with Paper clay and air-hardening clay so I had a good stock of embellishments in my bits box all ready to go! 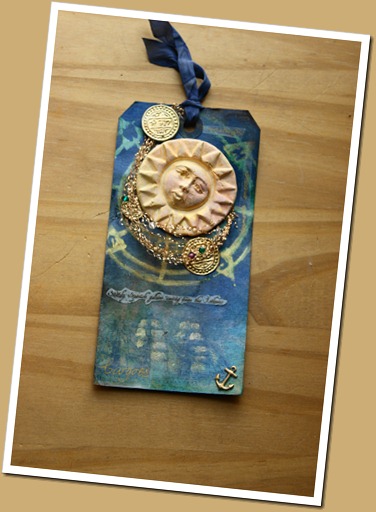 This was the first of the three I made.  I started with the compass mask (from Clevercut) and sprayed it .  For some reason I had John Masefield’s poem “Cargoes” in my head -

Quinquereme of Nineveh from distant Ophir,
Rowing home to haven in sunny Palestine,
With a cargo of ivory,
And apes and peacocks,
Sandalwood, cedarwood, and sweet white wine.

Stately Spanish galleon coming from the Isthmus,
Dipping through the Tropics by the palm-green shores,
With a cargo of diamonds,
Emeralds, amethysts,
Topazes, and cinnamon, and gold moidores.

Dirty British coaster with a salt-caked smoke stack,
Butting through the Channel in the mad March days,
With a cargo of Tyne coal,
Road-rails, pig-lead,
Firewood, iron-ware, and cheap tin trays.

I don’t know how to describe the material the gold wires were made from – it’s a sort of springy stuff that shivers and tinkles and snakes around.  I pulled it out and then made it into a bundle, threaded crystals on it (diamonds,emeralds,amethysts!) 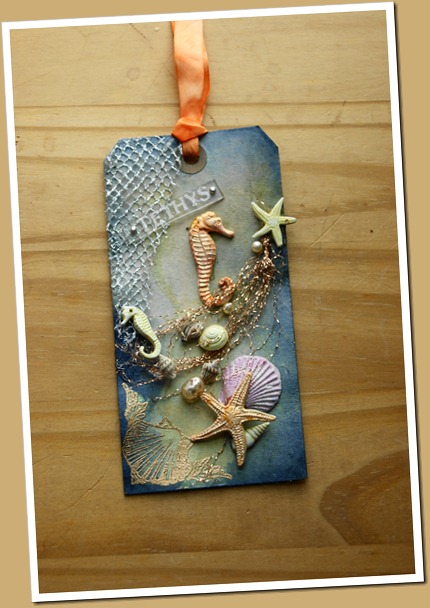 The small shells and seahorses on this one have been in my stash for ages – I got them from the Works!   The large shell, starfish and seahorse are paperclay.  The “Tethys” plaque (goddess of the sea) is shrink plastic and the shell corner stamp is from Clarity, and was where the tag started. 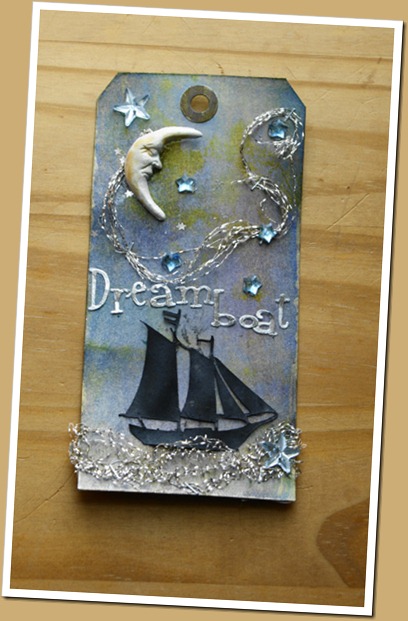 The ship was cut with my Craft Robo- the shape was downloaded using the Silhouette software.