﻿
Some time ago, that plucky gel, Lady Ermintrude Duffryn-Felix, accompanied by Major Thomas Felix, visited a Steampunk gathering.   There were a great number of spiffing diversions with which visitors could amuse themselves;  Lady E was particularly intrigued by an exhibit in the Contraption Competition, an automaton in the shape of a dog, called K-1909.  The machine was enamelled in shiny black, ornamented with curlicues in gold paint, and Lady E thought that was a most striking combination.
Accordingly, then, when challenged by SanDee and Amelie to design a Steampunk Cuckoo Clock, Lady Ermintrude recalled the mechanical canine and took inspiration from it, and here is the result. 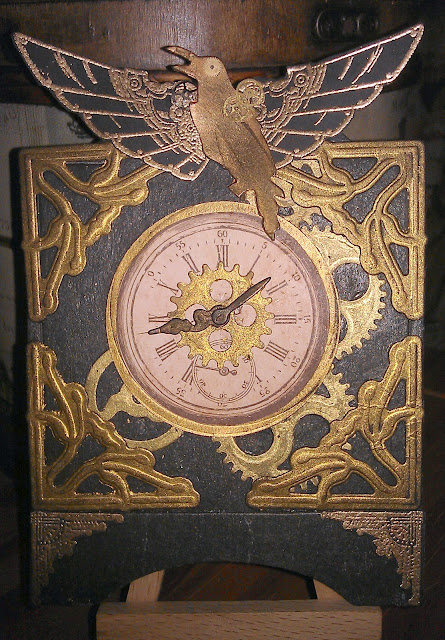 I began with by cutting a piece of greyboard (one of the dividers from a box of envelopes) using the Tim Holtz Cameo frame die.  I cut off the lower curve of the frame, and used the remaining greyboard to cut the base of the clock.  I coloured the board with black Gilder's Paste. I fussy-cut the clock face from 6x6 Chronology Paper (by Docrafts). Almost everything else is die-cut and GIlder's Paste (cogs  and clock hands by Docrafts, corners by Marianne, bird by Tim Holtz) except for the wings (stamp by Kanban embossed in WOW powder) and the fancy corners on the base (Clarity stamps).  The bird needed a bit of something extra, so I glued on some tiny watch parts.

And there we are.  I hope you like it.  Thank you for stopping by - come again, you're always welcome!
Posted by Keren Howell at 20:00

And Lady Ermintrude's efforts were highly appreciated by SanDee and amelie!

They were intrigued by the elegance of the design combined with the Schwarzwald touch - something they had never seen before.

Thank you very much for your awesome entry for SanDee&amelie's Steampunk challenges, Keren! Love all your die-cut elements and the embossed wings!

Only you could create something so perfect for that challenge like this!! Adore what you have done here Keren. Hugs, Jenny x

This is so cool! Beautifully created!

A beatiful creation - so unique! I most love the Cuckoo Bird - :-)
Wonderful!
Thank you indeed for joining the Sandee&Amelie´s STEAMPUNK CHALLENGE
XOXO SanDee

I love your cuckoo clock and the bird is beautifull =)