I can see clearly now

Hello big friends, and thank you for stopping by.

After the fun and frolic of the 31 days of Halloween Blog Hop - wasn't it GREAT? - I have emerged from my darkened room just in time to take part in the November Smeared and Smudged blog hop.
Here's the blog roll -


If you're following  the hop in order, you've arrived here from Sarah's blog.

The theme is TRANSPARENT, and for my offering I've used a snow globe.

These things are ace.  They are designed with a void in the middle which you can fill with whatever image you choose (and there's enough space to allow for a quite lumpy image).  The best bit is that you can change the image as often as you like - so you may be seeing the globe quite often in the future! 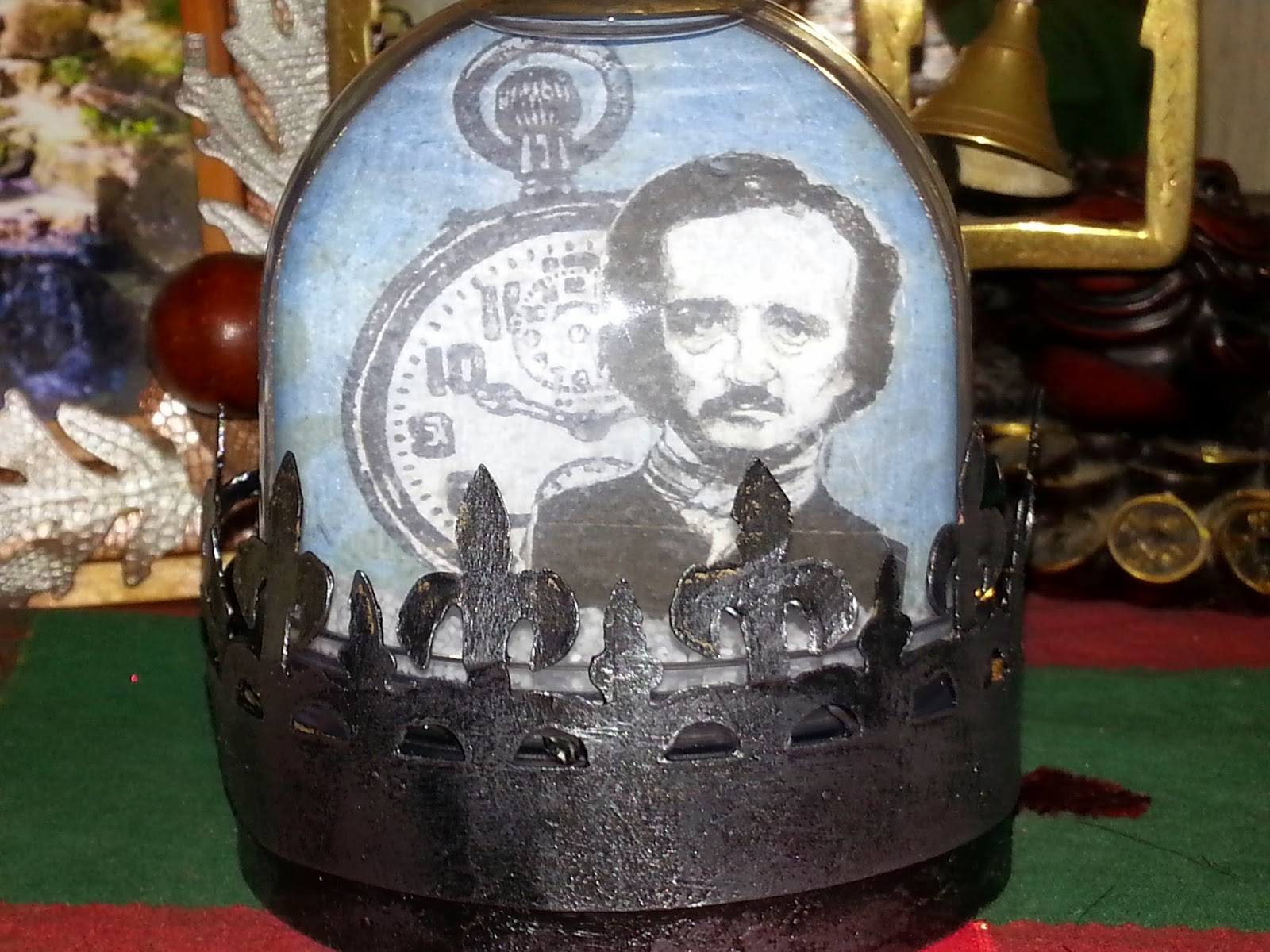 This was such a quick project, using the watch stamp from Creative Expressions (with a bit of masking and DI on the background) and the Poe digi by Rick St Denis.  I actually printed out Poe for another project, but he wasn't the right size when I came to use him....then I lost the bit of paper...
Anyway, it was so quick it seemed a pity not to do another insert for the other side of the globe...and it looked so GOOD all magnified by the globe...so I did another one.

So once I'd finished, I got to thinking that it was all too easy for a blog hop project, (I like to give value for money!)  so I decided to make a little stand for the globe to sit on.

I started with a carton that came with cans of lager.  (Of course, someone had to drink the lager.  The sacrifices I make for my art...)  It's a good weight, cuts well, and the price is right.  I found that one of my Spellbinders circles was just the right size for the globe to sit on so I cut three circles and glued them together. 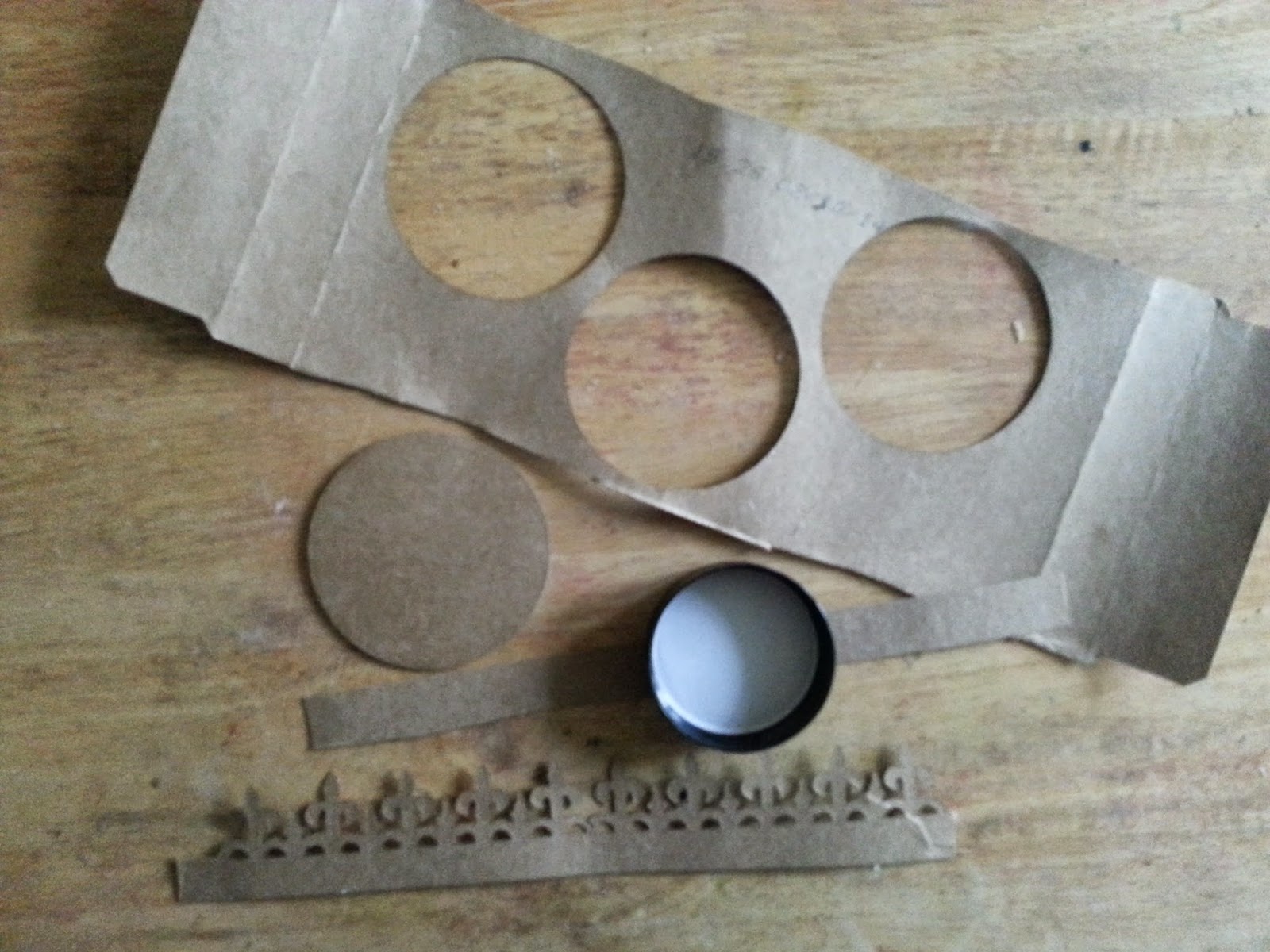 While I had the Big Shot out, I also cut a length of card with the Iron Works On the Edge die and another strip of card.  See the jar lid in the picture?  The strip of card was the same depth as that. the lid is there to provide support as the globe is relatively heavy and I don't want the card to collapse under the weight. 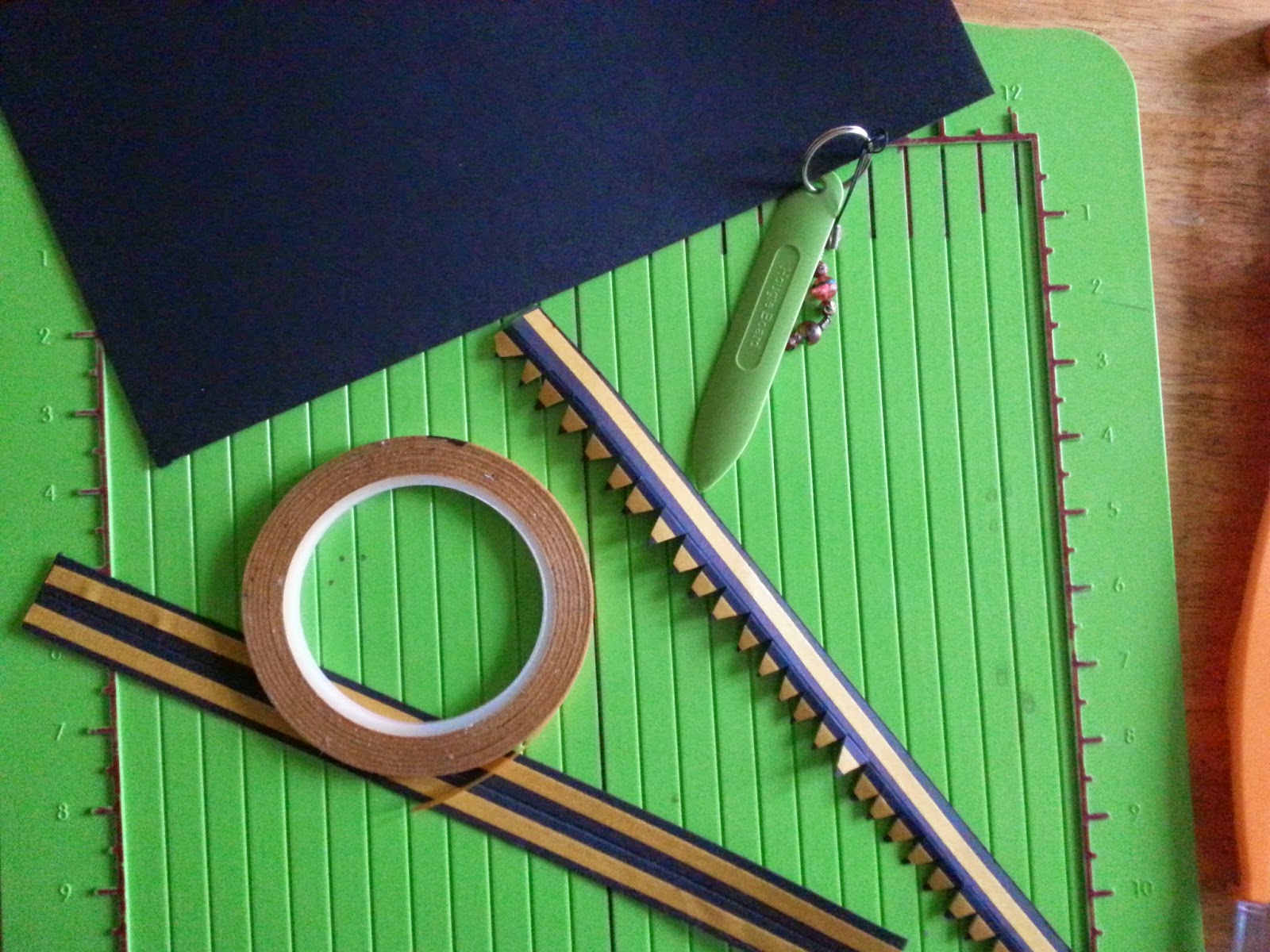 While the glue was drying, I cut some construction strips out of lightweight card (cut a 1 inch wide strip of card, score in half, and apply strong double-sided tape to the sides.  I use Template Tape from BCE.  I notched one side of the construction strip ready for the next stage - 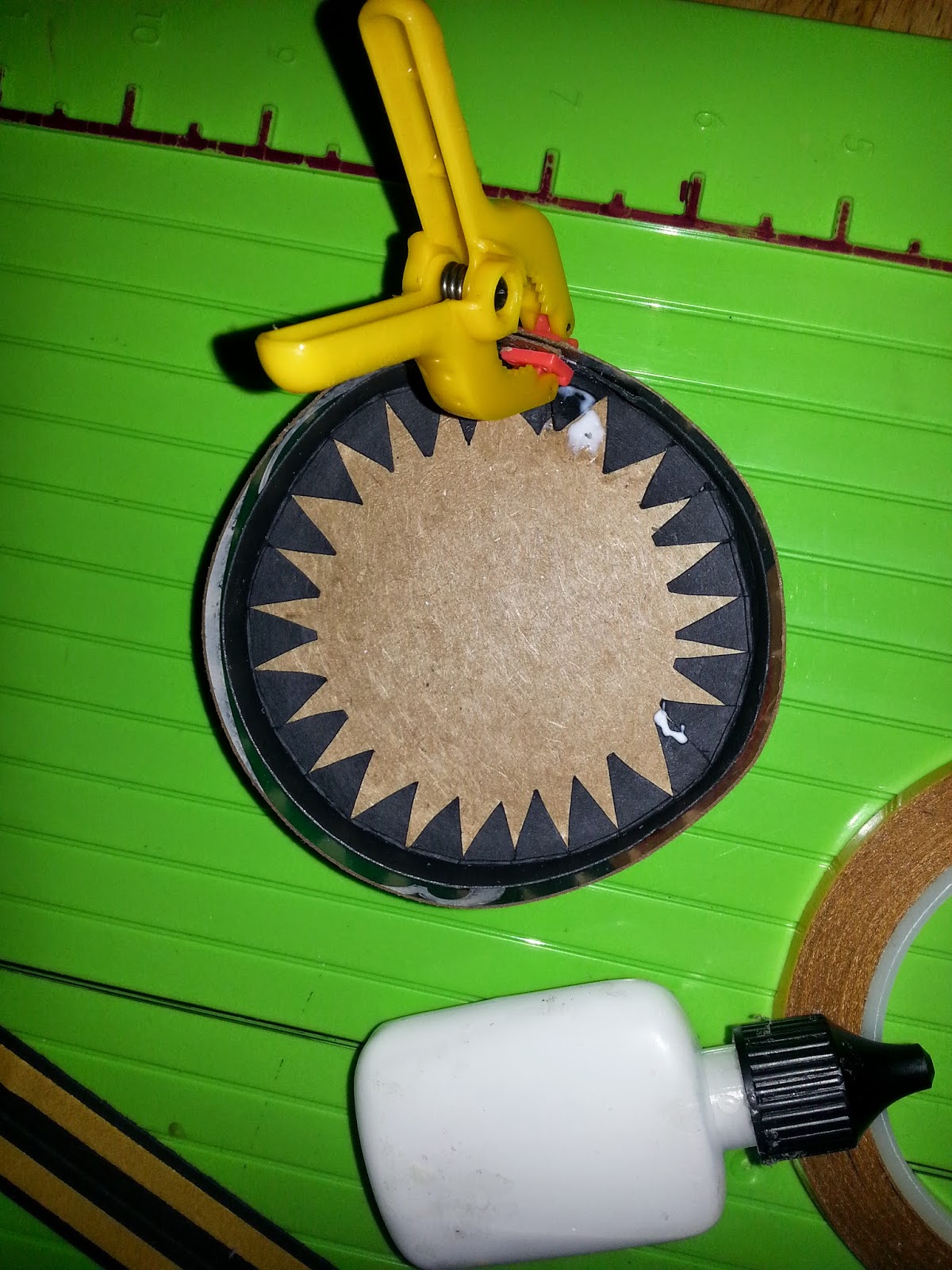 I glued the construction strip to the underside of the card circles.  I used glue as well as tape- the tape gave a quick grab, the glue makes sure that the project won't come unstuck.  I clamped it (mini clamps came from the pound shop!)  while it was drying. 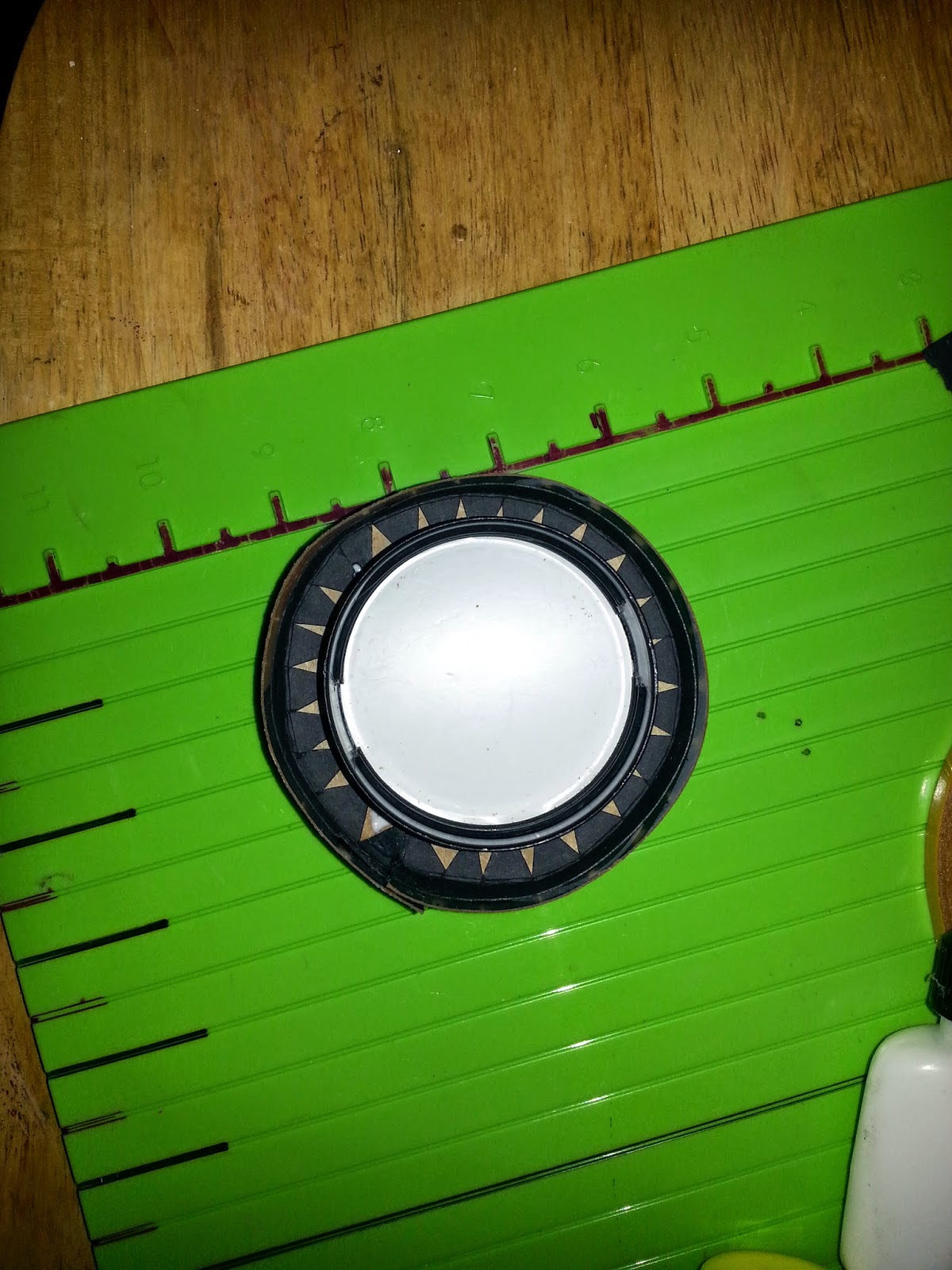 Then I glued the jar lid to the underside with glue gel.  After that, it was just a matter of sticking the edging onto the platform. painting it and giving it a coat of Decoart Metallic Lustre wax in black. 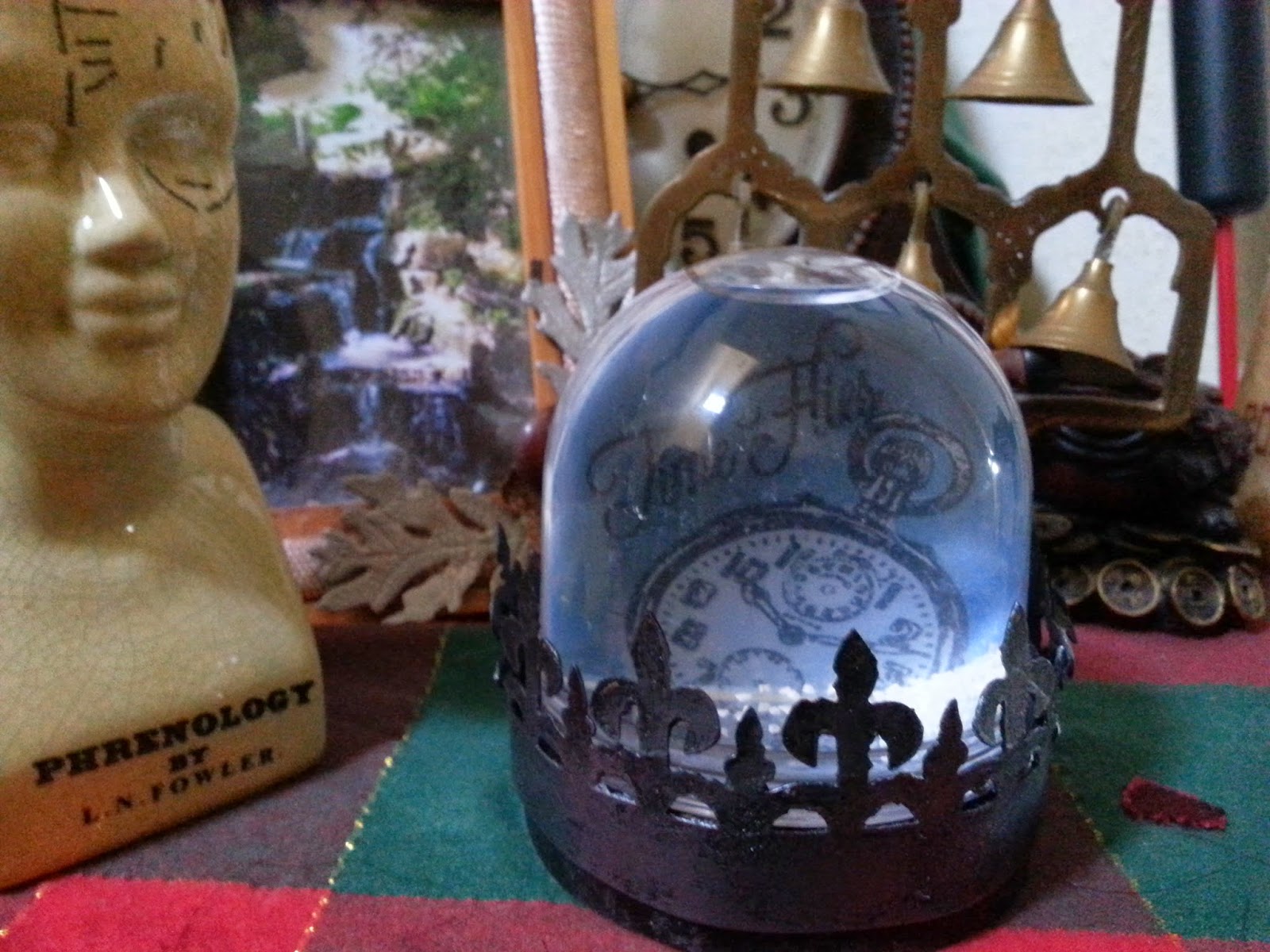 So, if you're working your way through the blog hop, you're nearly done. On to Susan's blog!
Posted by Keren Howell at 06:00

Another home run, Kim!! Love this snow globe and that stand with fleur de lis's (even though the Saints are how do I put it....not doing so well?!) I absolutely love! Wonderful images and of course I gotta get one of these snow globes now! Really great project!

So sorry Keren! I knew it was you but when I typed the K my mind did its usual flippy flop! I am just glad it hit me as I was hitting the exit button! So....another home run, Keren!! And so glad you made the sacrifice for the lager to give us this super project! I will now go hide in shame:)

Love your snow globe! What a great project, and the stand it's sitting on is perfect!

What a great globe and that's a clever base too. Jenny x

Fabulous globe and the stand makes it all the more special. xxD

Super POE Globe!! Thanks for all the instructions! What a great project!

Fab project! Thank you for making sacrifices for art...I dearly appreciate it! :)
I love your Poe globe, thank you for the tutorial!

Awesome Poesnowglobe! Love the image and the base you made, great fun! So good to see you again on this Hop!~kim

Love this!!! Poe looks awesome in his altered globe, why did I never think of this? I really like the detail around the outside of the globe too :)