Hello blog friends!  Welcome to my part of the Blogiverse, where today I am sharing my contribution for the  Craft Barn blog Alpha Challenge, which this week is brought to you by the letter B.

I considered "Bird" and "Butterfly" and even "Bricks", but in the end I went for

"Brave" - as in Native American warrior.

The stamp is from Creative Expressions, and I stamped it onto the reverse side of a piece of Centura Pearl.  I made three masks - one of the whole stamp, one of the brave's face and headdress, and one that masked off the outer part of the card (leaving the inner frame open).

First I masked off the whole of the stamp and coloured the background using my ink dusters and Big & Juicy inkpad (Foliage).  I picked up inks in the Ginger/Cranberry/Butterscotch sections.  The ink dusters make blending SOOOO easy, I love them.  Then I masked off the brave's head and the area I'd just coloured, leaving the circular frame behind the face open. This time I used the Waterfall Big & Juicy to get the blues and a hint of green.

Finally, I coloured in the face and headdress with Promarkers and stuck the definition onto the card.  Job done!

Thank you for stopping by!

I don't usually submit a project for the 3D challenge at SanDee and amelie's Steampunk Challenge blog.  This month's theme, Underwater Steampunk, got me thinking about 20,000 Leagues under the Sea and the Nautilus...and I remembered that, before Christmas I'd bought a spindle-shaped bauble that was going to be an airship but would make a good submarine...

So here it is.  It was covered in gold glitter to begin with, so I gave it a coat of Mod Podge to seal it and give a good surface for the paint (Eco-Green's Bronze).  While it was drying, I die-cut two copies of the Spellbinders birdcage die (which looks like a Steampunk spaceship to me) out of bronze foil card and coloured the lid of a pot of Twinkling H2O's and a little plastic propeller (bought from EBay) with gold alcohol ink.  I found a plastic ring that had been a space on a tiny alarm clock that I altered, and gave that the same treatment.  I coloured a section of bendy drinking straw with copper alcohol ink while I was at it, and wrapped a few bits of gold paper at strategic intervals so that it looked like a periscope.

Then I put it all together.  Cosmic Shimmer glue held the die cuts onto the body of the sub, and Milliput stuck the 3D elements. (I brushed some metallic mica powders over the Milliput while it was still soft ).  Last of all I gave it a wash of grungy acrylic paint, stuck on some dew drops (I coloured one red and one green as navigations lights) and the Naughty Lass was good to go.  (May God Bless Her, and All Who Sail in Her!)

Oh, and as I DEFINITELY got messy, what with the paint, Mod Podge, alcohol ink etc., I'm also entering this into the Anything But A Card Blog Challenge.

Thanks for  visiting - hope you enjoyed!

The Craft Barn's fortnightly Alpha Challenge has reached letter U.  Not the easiest letter to illustrate - I have to admit, this one nearly defeated me...but not quite!.  I considered "Umbrella", and "Unicorn" before settling on "Udjat"

The udjat is an Egyptian amulet, also known as the "Eye of Horus".  The right eye - which this stamp by Clarity shows - represents the sun (the left eye is the moon).  I stamped it onto some scrap Centura pearl card (the reverse side) embossed it in gold WOW powder and then dug out my Sakura Gelly Roll pens to add colour .  I blended DI's (Scattered Straw, Mustard Seed and Spiced Marmalade) over the background card, put some silicon glue onto the eye and stuck it on.  Then all that remained was to add the definition, and the job was done!

Hello blog friends, thank you for stopping by!  Life is still getting in the way of crafting here so I'm not getting about the Blogiverse as I should - I have LOTS of catching up to do and I promise I shall be getting there soon.  ﻿ 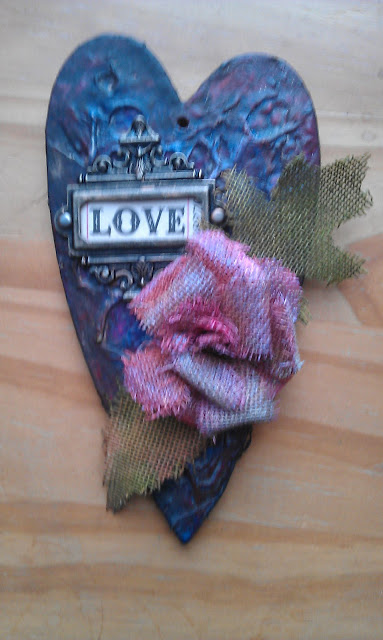 The June challenge at Our Creative Corner is to follow a recipe, chosen from the following lists (at least one item from each)


I've gone for fabric (the burlap rose), wood (the MDF heart), and paint (the finish on the heart).

The MDF heart was originally given its surface for Andy Skinner's Book of Ruination workshop ( I can recommend Andy's courses, definitely well worth the cost! ) but until now I haven't shared it on my blog, so I'm pleased to have the opportunity to do so now.    Because I learned the technique from Andy, it wouldn't be fair to him to tell how it's done - but I will say that it's surprisingly easy to achieve.

The flower is cut from burlap with the Tattered Florals and Tattered Leaves Alterations dies, then coloured with stains and mica sprays and shaped into the rose shape .  When damp, burlap is easy to shape and then keeps its shape when dry - I got this shape by cutting the largest flower twice and making a cut between two petals on one piece, then rolling it up to get the rose centre.  Then I stuck the two layers together, manipulating them in by fingers and getting very gluey to get the effect I was after.

To finish it off, I added some Tim Holtz bits, stepped away from the project, and called it finished.  Hope you enjoyed your visit!

It's WOYWW time again, or, as I like to think of it, Share-A-Shambles time.

Several projects on the go this week.  In the green bottle at the back is a Christmas Tree ornament which is going to become a submarine.  The pink frame is going to have crackle glaze and anther colour over the top.  And the tiny alarm clock is going to have a tiny floral arrangement inside it, unless I change my mind.  There's a paper violet just behind it  - LOVE the Susan's Garden dies from Sizzix - that I'm trying out for size.  The upright cardboard roll is my way of keeping paintbrushes handy.  That's it.  Thanks for visiting - off to zoom around the Blogiverse and return the compliment!

Hello blog friends, and welcome to my bit of the Blogiverse.  With Father's Day fast approaching, there are quite a few blog challenges that have set masculine/father type criteria.  And as Craft Supervisor Mysti is scrupulous in her observance of Father's Day, quite apart from bring Daddy's Cat and having missed him TERRIBLY when he was in hospital recently - well, something had to be done!

The Love of My Life loves pocket watches;  he has quite a collection. So when the Alterations Pocket Watch die came out, I had to get it - and it was just perfect for this year's FD greeting.

Open the cover and inside -

The cat face stamp is from Stampendous and the kitten has been stamped with a Creative Impressions stamp and the cut out from its background.  Open the inner frame-

to reveal the concertina fold album inside, featuring CS Mysti herself!  (she's going to get me to write a special message inside!)

If you'd like to see the "How I did it", you can see the details here -

This is being entered into the following challenges -

Labels: Anything but a Card, Artistic Stamper, Country View Crafts

If you like creepy, spooky or Gothic the Haunted Design House is for you.  They don't do pink and fluffy over there, as you can guess by the fact that their latest challenge is  - to use knots or a noose.

It's probably the result of being married to an unrepentant punster (who is much better, thank you to those of you who enquired after him) that I came up with this one.

The image is clipart downloaded from the web - I hope nobody goes looking at my search history...it includes terms such as hanging, gallows, and gibbet. ("Honestly, officer, I was doing research for a crafting project...")  I added in the words, adjusted the colour to sepia and printed it out on supersmooth card, which I diecut into the tag shape. I gave it  a few layers of DI (Scattered Straw, Weathered Wood, Peeled Paint an Frayed Burlap) till I was happy with it.

The last job was to make the hangman's noose (I've always wondered how to tie a hangman's knot and now I know how!) and adhere to the tag.

A bit grisly - but I hope you like it anyhow.

Well, it's halfway through the year (where is it going?) and time for Tim Holtz's latest tag & technique  Much to my amazement, I haven't fallen off yet!  I really liked this one - although there was a slight strop with self when I couldn't find where I'd stored the watercolour paper.  (Panic was averted when it turned up in a box where I was sure it would never be.)

As luck would have it, my friendly postman had just delivered a beautiful stamp (from Inkylicious) which I wanted to use, so this was a great opportunity.  For colours I used Victorian Velvet, Spun Sugar, Bundled Sage, Dried Marigold, Aged Mahogany and Stormy Sky - when I'd finished it reminded me of the pre- First World War advertisement which suited the stamp.

I was a bit worried about using the three products (ink, stain and acrylic) on the background tag, but I had faith in Tim and, what d'ya know, it worked well.  Background stamps were from my stash.  So - on to July!