This week’s challenge from Hels Sheridan is to make something pink. PINK? Pink? I am decidedly not a pink girl. It’s probably down to my mother’s habit of dressing my sister and me alike, but me in pink and my sister in blue, so as soon as I was allowed to choose, it was anything but pink for me. In fact, the first thing I chose for myself was in a very vivid tartan – and my mother admitted that it suited me better than any other dress I had.
When I was a child, the trend for having everything-for-a-little-girl-in-pink wasn’t as universal as it is these days. I don’t know what happened. I blame Barbie. Whatever the reason, pink has become THE feminine colour.
“But did you know that pink hasn’t always been a colour for girls, or blue for boys?….It started out with boys wearing pink or red because the colours were seen to indicate strength, while girls wore blue because they were “flighty” like the sky. From a 1918 editorial called “Pink or Blue” :


“There has been a great diversity of opinion on the subject, but the generally accepted rule is pink for the boy and blue for the girl. The reason is that pink being a more decided and stronger color is more suitable for the boy; while blue, which is more delicate and dainty, is prettier for the girl.””


So now you know more than you ever wanted. 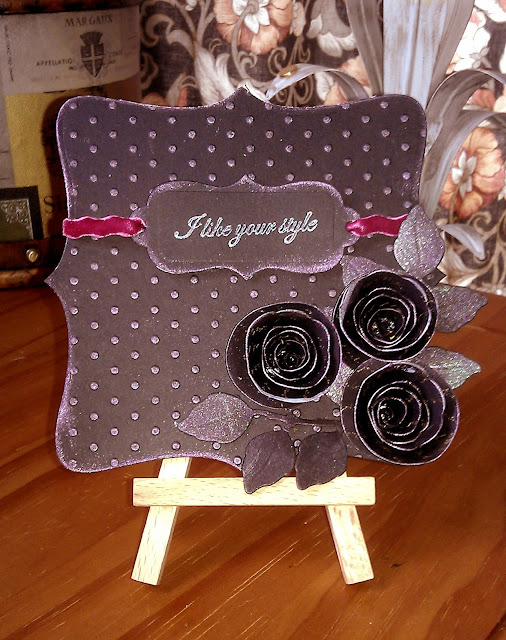 Crafty Austerity measures still in place, so I went digging through the haunted wing of my stash and found my Opalite inkpads, a reflective interference ink. I never really made much use of Opalite; it was one of those products that seemed like a good idea at the time but I never found a use for. However, one of the inkpads was in pink (Crystal Blush) so I hauled it out to play with.

While I was digging, I found some black die-cut coiled flowers, part of a Kanban kit that I’d bought because I liked the Steampunk-y elements. Now, Opalite works best on black so I stamped over them with a script stamp, coiled them up and then pressed the finished item into the ink pad to get a nice pink Opalite edge.

OK, so next I hunted out a Swiss dots embossing folder and embossed a bit of black card. While I had the Vagabond fired up, I die-cut the label shape and also cut some leaves and a small label , after stamping a sentiment– all from dies I’ve had for lo, these many years. (The leaves and small label are from Spellbinders. The label shape is from Go Kreate – I love that they sell dies that are bigger than the ordinary but not as big as the Grand Calibur dies; they fit very nicely into the Vagabond and I don’t have to pay for sizes I can’t use!)

A quick swipe with the Crystal Blush to highlight the dots and to edge the small label and it’s beginning to take shape. The leaves I did in a combination of the Crystal Blush and Cypress Frost. The. sentiment just wasn’t very visible in Opalite so I used silver Brilliance. A little bit of velvet ric-rac ribbon and there you have it. It’s pink – but not as we know it!
Posted by Keren Howell at 12:03

Austerity is definitely suiting you Keren, love your card, it is beautiful, great sentiment and wonderful flowers! A x

Love this, I am so NOT a pink girl either! THANKYOU for the info, I never knew that! Glad to see you are still using up your stash... I shall take a leaf out of your book methinks... Thanks for joining in with the Sunday Stamper x

What a great story. This is a great piece & 'Austerity' is definately the way to go! Love the texture background & the colour is fab. Sx

that's fascinating Keren, thank you for the info! i love those little snippets of historical info! but really you don't like pink - ooh that's sad. i think i love it so much cos my mum dressed me in a lot of blue! great to see that someone else is in the process of using up their stash -we're in the camp there! lovely card very lush and yummy! that reminds me i've got some of those ink pads somewhere hugs Karen x