Happy (Chinese) New Year, or should I say -

You pronounce it (I am told) in Cantonese as Kung Hey Fat Choy, and in Mandarin as Gong xi fa cai. Both sayings mean “Congratulations and Prosperity!” The year of the snake begins with the new moon on February 10 (if you would like to know more about the Chinese zodiac, there's some information here) so today I have decorated a little papier-mache box in oriental style. 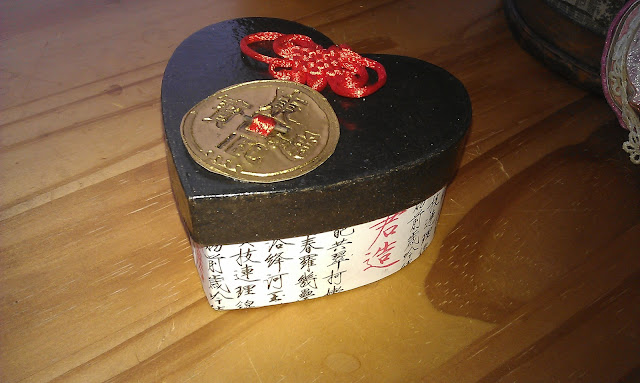 I covered the lid with black Gilder's Paste (I could have painted it, but the Gilder's Paste was right there on my workdesk) and then gave it a couple of coats of gloss varnish/sealer (Spray & Shine, in this case, as it was what I had around.)   I masked off the bit of the base that was going to show and gave the bit that will be under the lid some Gilder's Paste as well - I wanted to cover up the brown papier-mache but I didn't want to make the lid too snug.
I went digging in my stash of oriental papers and found a piece with Chinese calligraphy (from Crafhouse Press) that I liked.  I measured the depth of the base and cut some strips of the width I needed, making sure I got the red characters in the right place, and stuck them on.
I remembered I had a stamp of a Chinese coin somewhere (of course it was in the very last tray at the bottom of the very last pile of trays, which I went hunting in after I'd gone through all of the storage drawers.  I was beginning to think I'd dreamed it!) I inked it up with some black Memento, then covered a scrap of black card with embossing ink, threw on the gold Debbi Moore Metal Magic embossing powder, heated, repeated, and then pressed the stamp into the still-hot Metal Magic.  Once the embossing was set, I removed the stamp and carefully cut the coin out (being very careful around the square hole in the centre).  Metal Magic stays flexible enough to allow you to cut or punch for about 20 minutes. And it does a very good job of faking a metal embellishment, don't you think?
Nearly done now - I stuck the Chinese knot (I wish I could say that I'd done the intricate knotting myself but that would be a lie!) at the top of the heart, folding the ends of the cord around to the inside and gluing very firmly.  The last job was to attach the "coin" by threading the loop of the knot in and out of the hole in the coin and securing with a bit of skewer coloured black . 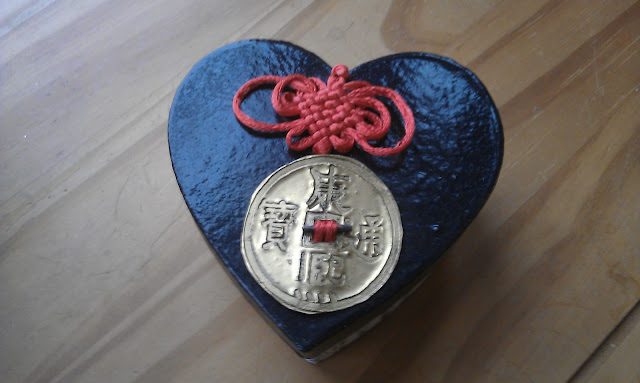 Hope you like it!  Thanks for stopping by - come back any time, you're very welcome!
(PS - I'm entering this in the Artful Times  blog challenge)
Posted by Keren Howell at 20:28

What a lovely heart box :) just right for popping a few chocs in for the one you love
hank you for sharing with us at Artfl Times
Von ☺

Love your beautiful box, that metal magic really does the trick, it does look like a real coin. Anne x

Wonderful Box. I Love the coin you created and the texture/finish of your project.

Fantastic box, love the stamped coin and the knot work.

Sorry I am so late blame it on the jet lag please.
A delightful box and a lovely write up too, love the use of the Gilders Paster and the knot.
Thanks for joining us at Artful Times,
Hugs, Neet xx