This week Linda Ledbetter (sponsored by Simon Says Stamp) has challenged us to produce something using the "Spritz and Flick" techinique from Sir Tim of Holtz's Compendium of Curiosities Volume 2.  Now, a few bloggings ago I used "Men Are From Mars" as my tag theme, and ever since then I've felt like I'm waiting for the other shoe to drop!  So, at last -


Women are from Venus! 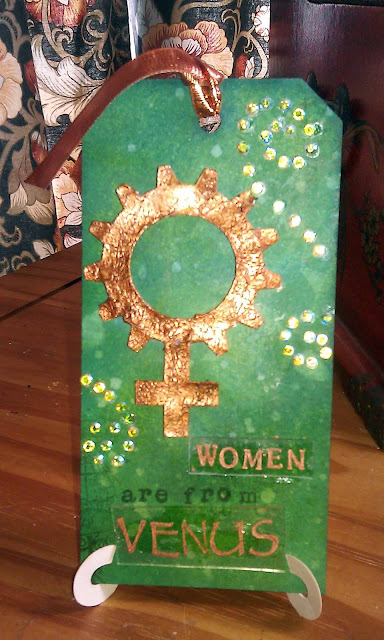 I have a confessionlet to make.  The tag on this one was going to be the "Starry Night" tag for Sunday Stampers last week, only it went a bit wrong.  I'd stamped the stars onto the plain white card in Versamark and put the first layer of colour on, then stamped the swirls and added more colour - and they all just disappeared.  Far from Resistance being Futile, the resist wasn't happening, so rather than throwing good ink after bad the tag went into the "do something with it later" pile and I started work on V2.

As you know, Crafters Never Throw Anything Away.  And Crafting Austerity measures are still in play chez moi, so it occurred to me that I could use the tag as the basis for this week's Studio L3 challenge.  In astrology, Venus's colour is green and her metal is copper.  (Her day is Friday, so very appropriate for a Friday challenge!) I wanted to incorporate the correspondences into my tag, so out came the green distress inks (Peeled Paint and Mowed Lawn, with a touch of Peacock) over the top of the blue that was already on the tag they went, in readiness for the technique.  And, blow me down, the stars and swirls I'd never thought to see again reappeared as if by magic!  I stamped some of Sam Poole's Dress Forms in Cactus Green Staz-On (second generation stamping to get the faded, barely-there look) into the background while I was at it.

The glyph I designed and cut on the Cameo then crackled wirh copper Croco paint, and stamped "Women" and "Venus" on shrink plastic (having to stop now and then to satisfy Craft Supervisor Mysti's demands for head rubs).  A bit of "emerald" (AB hotfix crystals coloured with Promarkers) bling ) and there we are.

Thanks for visiting!
Posted by Keren Howell at 12:28

Ooooo, I love this! The green and gold are lucious together.

Fab tag Keren and what a good save!! Isn't it amazing how 'disasters' usually work out with bit more ink. To be honest there are times when I think men are from a completely different universe! (surrounded as I am by four of them) and I'm sure they feel the same:¬) Good luck with the challenge. Hugs, Buttons x