The theme for Hels Sheridan's Sunday Stampers challenge this week is "Dream", which works well for me as I'm still feeling the celestial vibe after last week's effort.  I'm also inspired a bit by Van Gogh's "Starry Night", a painting I admire very much.

Now who'd-a thought that my long-ago textile arts classes would have come in handy?  Back in the mists of time, when I was doing my teacher training,  we had to study additional subjects that were from different curriculum areas to our main course of study.  As I was studying English,  I had to take Science and Art.  In our final year, we had to choose a specialism for Art (stick with me, this is going somewhere, I promise!)  I enjoyed embroidery so I chose Textiles.  HOWEVER - there was one man in the group, and because this was the 70's and men could not possibly do embroidery, our tutor decided that we should do batik instead.  All year.  Now the thing about batik is, once you've drawn your design on the fabric in wax and then dyed it, you just have to wait for it to dry.  You can't hurry it.  And if you only have one piece to work on, it doesn't take three hours (which is how long the class was) to get the next layer of wax on, and into the dye and out again.  Our tutor obviously felt it was all a bit futile as she used to disappear a short way into the session...and shortly after she left, so did we... 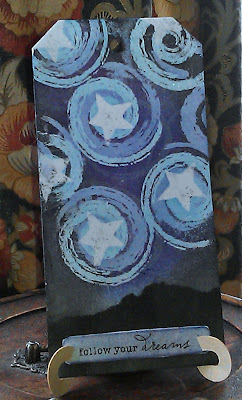 Still, I did learn a bit, as demonstrated by this tag.  I began by stamping and embossing the stars, then colouring the tag in Cloudy Blue Adirondack with Colour Duster brushes.  Then the first lot of swirls (stamp from The Artistic Stamper, the freebie covermount on Craft Stamper magazine a couple of months ago).  This time I brushed on some DI Lilac, and Faded Jeans, and stamped and embossed the swirl again in a slightly different place.  Then the last colours brushed on were Seedless Preserves and Dusty Concord, and some Black Soot across the bottom (I masked off the top part of the tag with some torn paper) and around the edges.

Once it was all done, I covered the tag in kitchen towel and ironed it with a hot iron, changing the paper towel until all of the embossing powder was removed.  The I added the sentiment (one from Pink Petticoat) and the job was finished!  Not sure what Vincent would've thought of it, though....
Posted by Keren Howell at 16:40

How very inventive of you - it looks quite dreamy too. Great story about the teacher too.

Ooh gorgeousness indeedly.. .love it... thanks for joining in with the Sunday Stamper x

Akkk, I keep getting Error 503 whatever that is! Anyways, I keep saying.... LOVE this... the technique is FAB... thanks for joining in with the Sunday Stamper x

See, I knew that would happen... two comments lol

The colours and swirls are lovely. jenx

Van Gogh would have wanted to know how you did it - saw a dramatisation of his life and he was a real one for learning and practicing. Isn't that the sort of learner every teacher wants?!!
Now to the matter in hand - your tag - frankly I'm blown away! I can see Starry Night in it (please do a bigger one with some lovely dark cyprus trees) but I can also see the Aurora Borealis in it too. Truly beautiful, hugs Buttons x