"Twinkle, twinkle, little bat!
How I wonder what you're at!
Up above the world you fly,
Like a tea-tray in the sky."
(Lewis Carroll - Alice's Adventures in Wonderland) 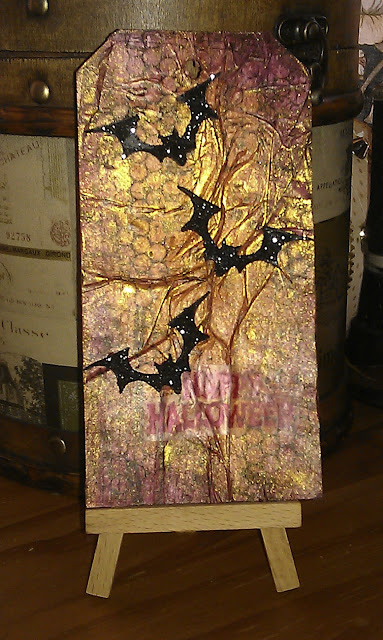 The Altered Alice's challenge this month is to create something that twinkles or shines, and by happy chance Tim Holtz's tag for October uses glitter (Tim uses glitter!  Whatever next?), so it's one stone, two bats for this one.  I used a background stamp from The Artistic Stamper (Sequin Waste) as I didn't have a cobweb stamp (how did I let that happen?) but I think it works OK!

Hallowe'en is my favourite festival of the year.  When I was a child, the emphasis was more on Guy Fawkes night (we used to have HUGE bonfires in the village) and because legislation was a lot looser then going out at night was positively hazardous from the end of September until November 5th due to fireworks going off (usually "bangers").  It's probably just as well that we make a bigger deal of Hallowe'en now.  I've got all sorts of plans for this year..
Update - Honourable Mention at The Altered Alice - thank you so much!
﻿
Posted by Keren Howell at 12:11

Wow Keren! You can really see that fab gold shine from this beautiful tag. It makes your bats really stand out. Love it. Hugs, Buttons x

Love the shimmer of your tag...and if you win, maybe there's a cobweb stamp at Smeared Ink for you to choose! Good luck!

Oh so gorgeous! Love your fab background and sparkly bats! thanks for joining us at The Altered Alice. xxD

Love your tag. The background you have works just great!!!

The light that this exudes is fabulous! It caught my eye right off! Love the golden hues with those bats! Great take!

This is gorgeous, that wrinkled background texture behind your twinkly bats is fantastic! Thanks so much for playing along with The Altered Alice!