In the US and Canada, November is the month of Thanksgiving, but here in the UK it's the month of Remembrance - first we remember the Gunpowder Plot with fireworks and bonfires (which were originally lit to celebrate the Celtic New Year and the final harvest of the year at Samhain), but mainly we take time to remember those who died fighting to protect their homelands.

Both my grandfathers fought in the First World War.  My father served in the RAF in the Second World War - he was a mechanic who kept Spitfires flying.  Happily, they came back home again, but many didn't; my great-aunt's first husband was killed in France.  So my take on Tim Holtz's tag for November features poppies.

"The poppy is an instantly recognisable symbol of respect for those who've made the ultimate sacrifice in conflicts past and present. As the nation's custodian of Remembrance, the Legion is committed to helping everyone understand the importance of Remembrance, so those sacrifices are never forgotten." Royal British Legion 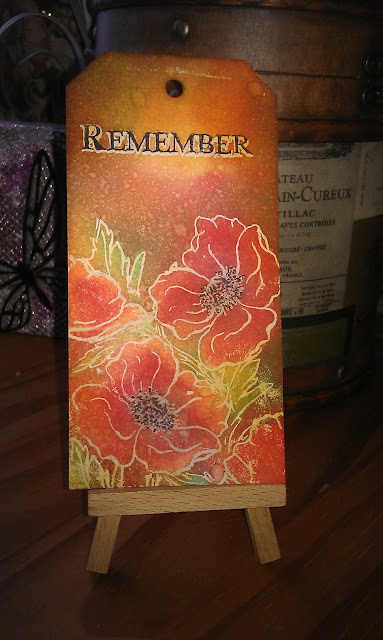 The poppy stamps are from Sheena Douglass's Paint Fusion range, stamped in Versamark, then embossed with detail embossing powder before masking them off and stamping in the leaves.  The "Remember" stamp I made with my Imagepac kit .  I had to adapt Tim's method a bit - I used DI pads instead of Distress Stains as I wanted to control where the colours went - I'm hoping the Craft Police won't be paying me a visit as a result.  After I'd taken the embossing powder off,  I stamped the "Remember" again in black archival ink and added the poppy stamens in black marker.

I'm going to be observing the two minutes silence at 11 a.m. on Sunday and I'll be thinking of the men and women who fell in action, defending their country.  Please consider joining me.


Thank you for visiting.

I really love the way the poppies came out and the poppy stamp is lovely! Nice adaptation.

Just beautiful Keren. Don't think the craft police will mind in the slightest if you do things differently when you get results like this. Love that you didn't need to add extra elements to make it wonderful. Hugs, Buttons x

Hi Keren this is a beautiful tag. I love the colours, spritzed background and the poppies are amazing.

Love the poppies--so beautiful and so perfect for remembering those who have sacrificed.