The Ghost of Tom

The "Ghost of Tom" has been haunting me lately. In case you don't know, it's a round, in up to four parts, and great fun to sing (especially the ooh-ooh part).

So, as the Macabre Monday challenge from Haunted Design House this time is "Skeletal Remains", I decided to take it as my inspiration. 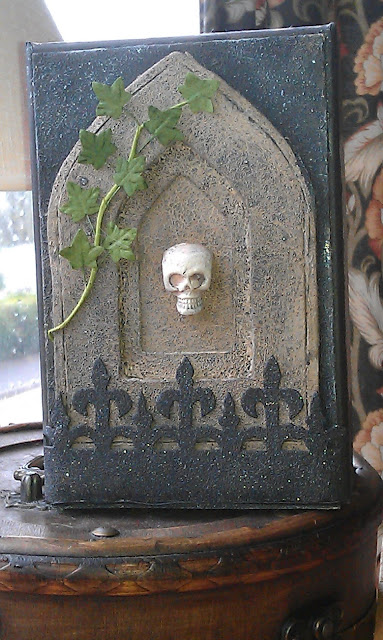 At Halloween we got some plastic skeleton decorations and I used silicon putty to make a mould of one of the skulls.  I used this to make a flat-back mould out of Fimo.  (Did you know that you can bake polymer clay in a silicon mould?  I didn't, but it turns out you can.  It takes a little longer but it does mean that you don't distort small pieces taking them out of the mould before they're cooked).  While it was cooking, I die-cut some arches out of chipboard.  I love these Movers &; Shapers arches - I got them as a birthday present. 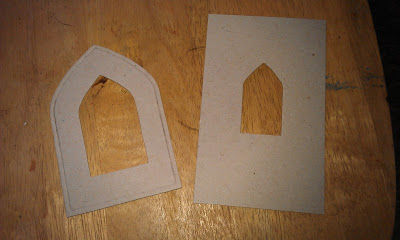 I layered them up, using corrugated card from a packing box to add dimension (sturdier and cheaper than foam tape!) 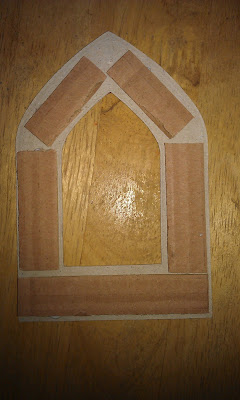 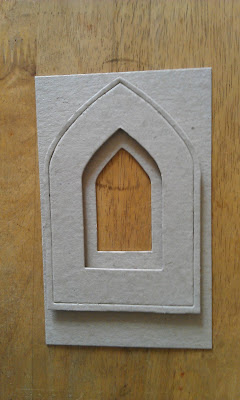 This (and the shape that came from the middle of the frame - the middle sized arch) got a couple of coats of Viva Terra  (in the pale creamy colour) to give it texture, and I gave a piece of black cardstocl a coat of Decoart Fierro (similar to Ferro) to be die-cut with the Iron Gate On the Edge die once dry.

I gave the skull and the chipboard some antiquing with washes of acrylic paint and a bit of dry-brushing and assembled the whole thing, adding a bit of imitation ivy from my stash and the Iron Gate die cut and sticking it all onto a papier mache box. 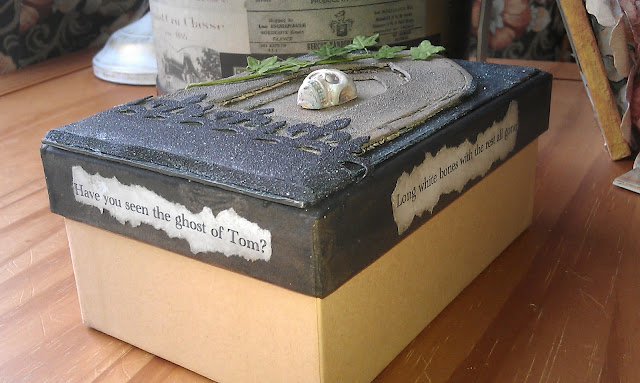 Finally, I printed out the words and tore them out line by line, stuck them to the sides of the "casket" and blended some Pumice Stone Distress Ink over the top to age them a bit.

Now all I have to do is decide what I'm going to do with the base of the box...decisions,decisons!

Thank you for visiting!

Very cool. Love how you made the skeleton yourself. I'm sure the bottom half will turn out just as great.

I love how you created the arches and gave them dimension. Not sure if it is right to 'like' a skull but I do like this one - great tip about baking in the mould, I didn't know that could be done. Hugs, Anne x

WOW! this is a FABULOUS box lid! love the texture, the arches and the skull. Thanks for sharing with us at Haunted Design House :)

WOW Keren, this is amazing! Love the texture and how cool about baking the clay in silicone. Fabulous piece. thanks for sharing with HDH. xxD

Very classy and VERY, VERY cool. Thanks for sharing with us at haunted design house x

I love the textures and the way you have created the arch. I did not know that about the moulds. I shall keep that in mind as I have just made my first set of moulds. Thanks for joining us at haunted design house.

Amazing Keren! I feel a lot of mud coming on for that base:) Hugs, Jenny x

FABULOUS - love that arch. Super way with the textures too. This looks brilliant. Thank you for playing along with us at HAUNTED DESIGN HOUSE