Hi everyone, and welcome to my blog.  Today's post is all about my entry for this month's quest at the Quoth the Raven, Nevermore blog, which is a celebration of all things Poe and doesn't do cute (well, neither do I).  The challenge is to choose three elements from a list, and I have chosen - lace, flowers and Edgar Allen Poe.

I've taken my inspiration from Poe's short story, "The Masque of the Red Death", which is set in against the background of a mysterious plague.  To avoid the Red Death, Prince Prospero, together with a thousand of his nobles, shut himself up in one of his abbeys.  After being isolated for some months, the prince gives a masked ball, decorating each of seven rooms in a different colour. In one room, which is decorated in black and red, is a large clock;  every time it strikes the hour, the guests stop their revels, disturbed by the sound.   At midnight, a hooded figure with a terrifying mask, that of a victim of the Red Death, is suddenly noticed by everyone...(dramatic music, flash of lightning, clap of thunder!) 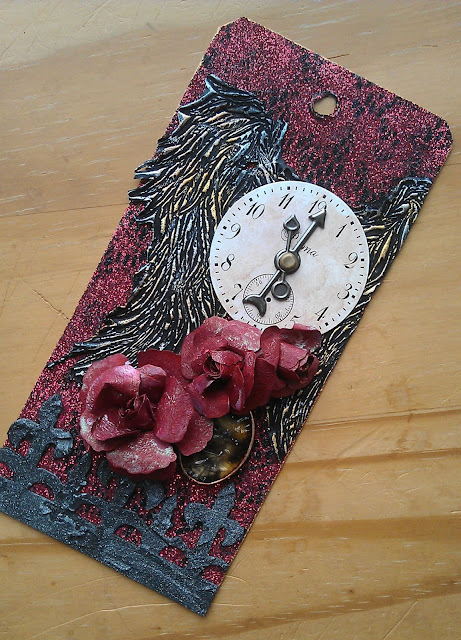 Confession time.  I wanted to use the tag background for another challenge, but didn't get it finished in time, so I put it to one side and hoped it would come in handy.  It's a fun technique, this one - but you do get covered in glitter.  I covered the tag with some double-sided adhesive sheet, then covered that with a piece of lace and sprinkled on the black glitter.  After I shook off the excess, I removed the lace, then sprinkled on the red glitter. 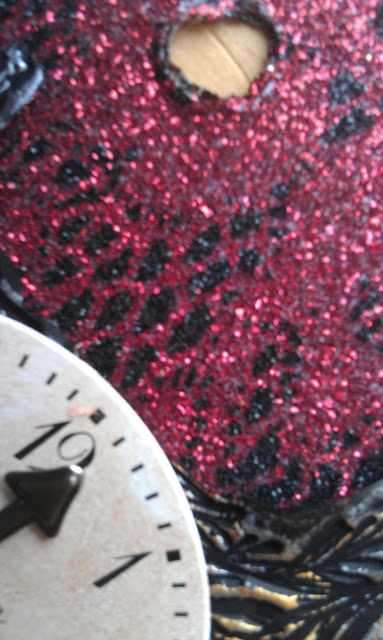 When I tried the effect of the clock face (from Prima) against the background it needed something to help it stand out against the bling.  I'd been playing with gel medium, mixing it with black gesso and then spreading it over stamps.  Once dry, it can be peeled off and the resulting image can be added to your project.  I'd tried it on the Angel Wings stamp (from Sheena Douglass).  Now, either the stamp was a bit too detailed or I didn't put enough gel medium on but it was very delicate and fiddly to remove, so I'm not sure if I'll try the technique again, but once I'd rubbed some gilding wax onto the finished wings they did look rather good in a "Dark Angel" kind of way and the clock face looked good against them.

I printed out a picture of Poe, sized to fit an oval pendant blank I had handy.  I covered it in Crackle Accents as I wanted an "aged and distressed" look.  While it was setting, I made three roses using my favourite method and sprayed them with some mica spray.  I had a piece of card that I'd covered with Viva Ferro paint, and I die-cut it with the Fleur-de-Lys On the Edge die in my Vagabond. 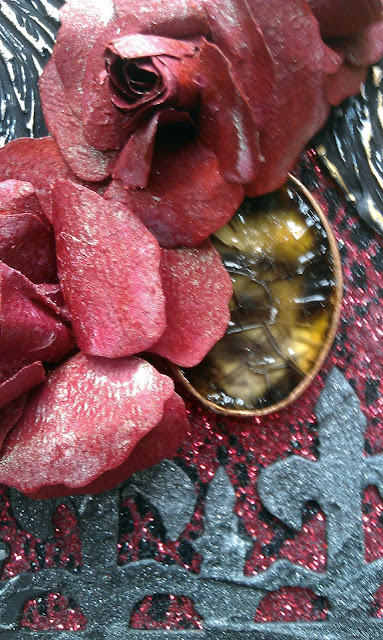 After that it was just a question of putting it all together.  I used a couple of foam dots on the back of the pendant as the bail is quite deep, and Pinflair Glue gel for the roses.  Cosmic Shimmer glue worked for everything else, even the clock face, which is made of  metal.

And there it is.  I hope the Master will be pleased with my humble offering;  and that you liked it, as well.  Thank you for visiting - see you soon!

A fabulous tag Keren, love the story of the Prince too. I tried Sheena's technique too - don't give up yet, it works much better with a little more paste (my first was too thin) and is not so delicate - I think yours looks great though. Hugs, Anne x

Wow. I love your tag, it's gorgeous. I love how you did the wings, I think I will try that some time.

Hi Keren
this is a very dramatic tag and I love the effect it really is stunning.
I want to get some medium and try it over the stamps as I saw Sheena do on C&C. I hope you will share it with us when you have another go at it
Ria

I am sure the Master will be thrilled to see your amazing work Keren. That background is a real glitterfest and has worked so well. Didn't see Sheena's technique but if your work is anything to go by it is one which will be hunted down asap. Hugs, Jenny x

Love the glitter background and those wings turned out great even though you had to fuss with them. :-)

OMGoodness - this is totally stunningly AWESOME !!! Super effect with the lace and glitter. Brilliant. A fabulous tag.
Thank you for playing along at QUOTH THE RAVEN :-D
Hugz
IKE x

Congratulations - Excellent work! Really like this watch, medallion with the image of Po - like amber! Heartily wish you success!
/I'm still waiting for my
inspiration /

Beautiful Tag! Love the texture on the background and the image and flowers are gorgeous! Thanks for sharing with us at Quoth the Raven :)

Stunning tag with gorgeous texture.
Thank you for sharing with us at Quoth the raven BDx