Hello, blog friends and thank you for visiting.

I've been a bit quiet lately.  There have been a couple of reasons, one being that my husband has been in the hospital (he had a nasty infection in a gland in his neck and spent five days on intravenous antibiotics).  Running to and fro to visit him, plus the demands of getting  to grips with a new job and recovering from the old one (seriously stressful!) left me little time or inclination to craft. Then I got a bit carried away with my entry for the Quoth the Raven challenge...it turned into a real project.  So this post is going to have quite a few photos.

The theme is "Anything Poes" - and I've taken my inspiration from "The Raven". 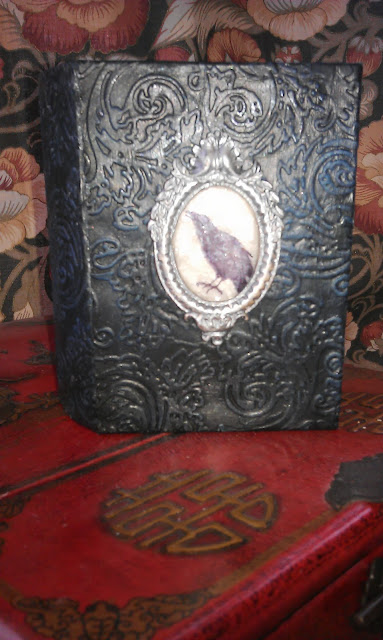 It was originally going to be a notebook cover.  I began by embossing black cardstock and painting it to get the look of leather - one of Andy Skinner's Timeworn Techniques.  The frame was made using a mould bought from a well-known internet auction site and is moulded out of paper clay, painted silver (Eco Green Antique Silver, as it happens.) The plaque I made out of Pearl white Fimo. When it was cooked I stamped the raven stamp (from the Tim Holtz Hallowe'en set) in black archival ink and covered it in Glossy Accents.  I made the book cover out of chipboard (yes, the pieces that come to act as dividers in the boxes of envelopes we have in the office.)  And I could have stopped there...but I didn't.

I decided to put the poem into a mini album using Laura Denison's "Stack the Deck" method.  The great thing about this method is that it allows space for embellishments.  I love getting a 3D element into my projects and my latest toys are some Martha Stewart silicon moulds, including this frame, so while I had the paper clay out it would have been rude not to make it.  I made my own mould (with Siligum) of a rose-shaped bead and made a few paper clay roses while I was at it. 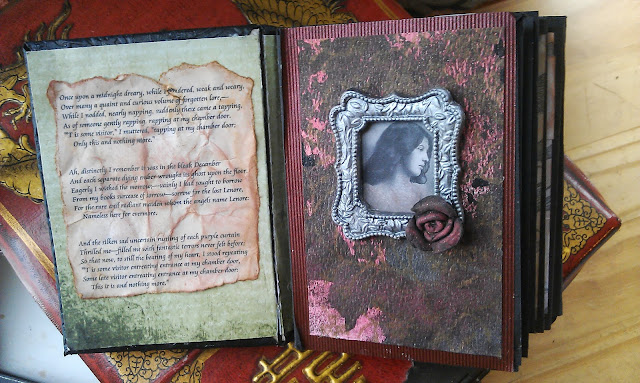 I made the leaves for the Stack the Deck out of black cardstock, and while the paper clay was drying I went searching for some suitable papers to suit my project.  In the haunted wing of my stash I found a pad of "oriental" papers I've had for years - so long I can't remember where or when I bought them - but the rich colours were just the job.  In the pad there was some white textured paper with a gold flower design that I didn't like very much.  When the flowers were dry I put some sheets of the white paper underneath them while I sprayed them (black & red Mr Huey's and pewter and red Radiant Rains)...and they suddenly became yummy - result!  All that was needed then was a vintage picture (again, one I've had for years) to represent Leonore and to paint the frame silver. 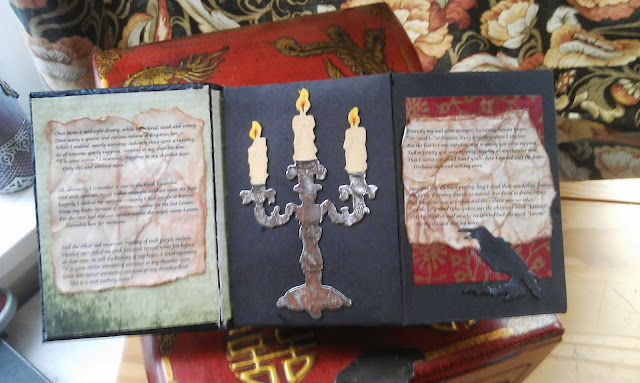 Next pages - the window is a digital stamp from Ike's, printed out twice, colored with Spectrum Noirs.  I cut the panels out of the lower print and stuck the frame onto acetate. I backed the acetate with a scrap of card - I masked the moon and blended shades of blue ink (Adirondack Cloudy Blue, Stonewashed and Denim) over the mask with a bit of Dusty Concord and Black Soot Distress Inks around the edge.  I used the Split Tree stamp from Clarity to get the branches (I used Memento ink).  I repeated the process on the tag and added the Raven  (Dah-dah-DAH!)

The raven and the background paper on the left are from Ike's. (I like Ike's.  They have some very fab digital stamps in the fantasy/gothic genre)  On the right, the raven is from Smeared Ink - added to the bust of Pallas and coloured with my Speccies (hard to see in the image but it is really a light grey).

Nearly done.  You can find directions for the pushmi-pullyu card here.

The last page.  Thank you for staying with me in this marathon post!

Keren
Posted by Keren Howell at 13:28

I really hope hubby is back to full strength soon and that things calm down at work. Sounds like you've had a bit of a time of it recently.

So my admiration for your work gets even bigger, as does the shopping list!!! Where to start - the cover looks perfect with it's leather look and fantastic plaque. And then a feast for the eyes lies within. It's a real 'page turner'.

Wow! When you decide on a project, you really go all out! This is amazing work! Such a wonderful showcase for Ike's and SI's awesome images. I didn't realize MS was branching out into silicone molds. Must begin looking for those now.

WOW!!! I don't know where to start.... your notebook is beautiful and you have done an Ike and SI proud with their images. Thank you for all the photo's, it is a joy looking at each and every page.
Thanks for sharing with us at Quoth the Raven :)

Oh my goodness Keren, I think I am speechless - this is the most amazing creation! I love everything about it, the leather look cover is just fabulous, the pages are amazing. Whatever I say does not seem to be enough - this has to be a winner!

Sorry to hear about your hubby, hope he makes a full recovery soon and that things settle at work for you too. Hugs, Anne x

I am sorry your hubby has been so poorly and wish him a speedy recovery.
Your Book is beyond gorgeous... the work involved really shows.... it is totally magnificent.
Thank you so much for spending so much precious time making something so stunning for us at QUOTH THE RAVEN.
BDx

This is totally AWESOME. !! The front cover is divine with that superb leather look. All the pages are amazing and it's a joy to see such an amazing amount of crafting in one project.
Thank you very much for 'showcasing' some of my images and for sharing this epic piece with us at QUOTH THE RAVEN :-D

Sending healing vibes to your Hubby too x