Spring is springing up everywhere!  I thought the daffodils had been washed away in the torrential storms we’ve had over the past few months, but they made it through the winter and now they’re everywhere.  Over at Ikesworld  challenges we’re celebrating the spring as well.  Here’s my project: 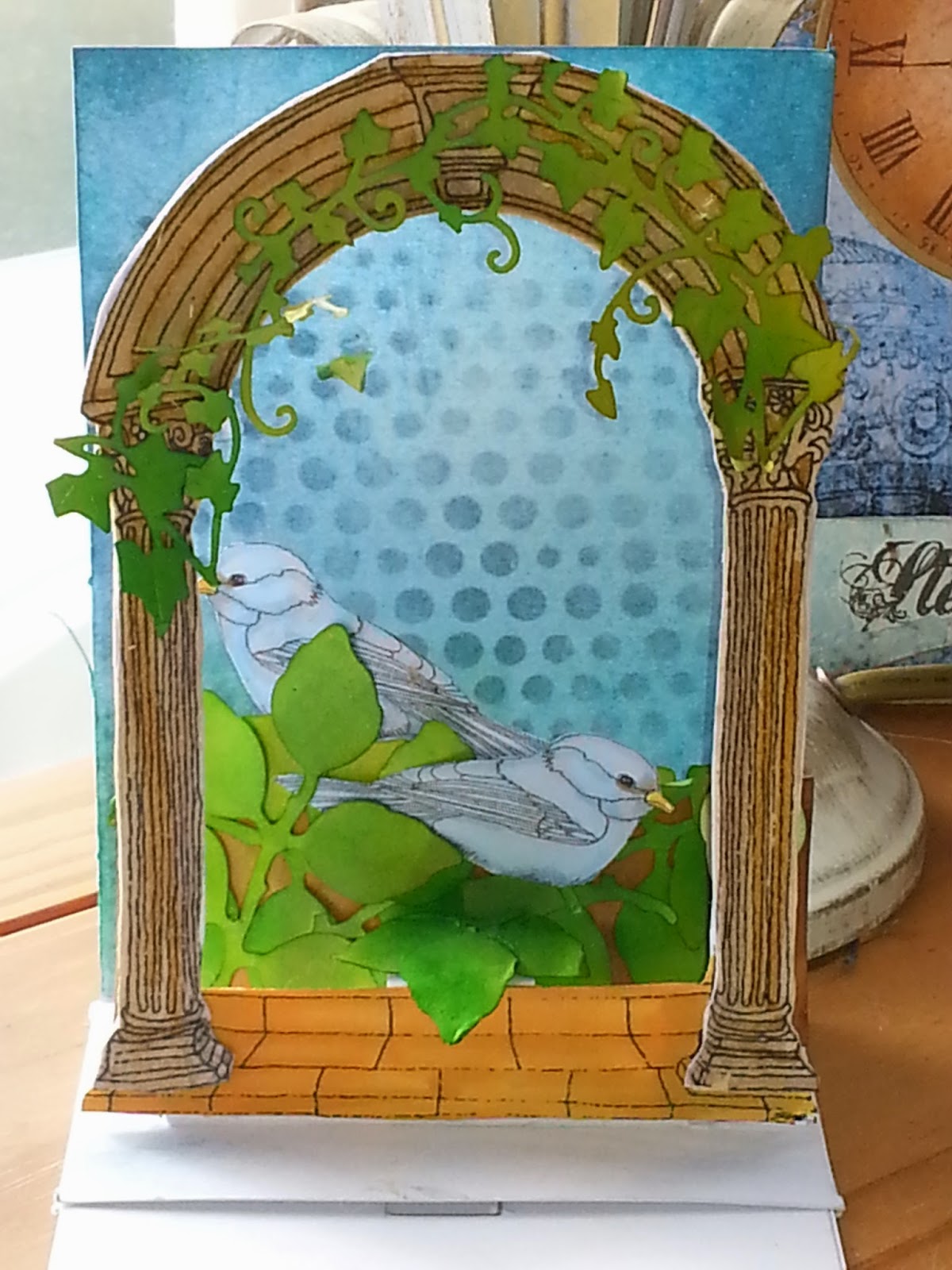 I used two of Ike’s digis, the Arch and Finch on pine.  Pine didn’t seem to be very spring-like to me to when I printed out the digi I cut the bird away from the branch.  Now, I am not an ornithologist;  in fact, I have a bit of bird phobia.  I react to birds the way some people react to spiders (I’m fine with spiders, by the way) so, having avoided the creatures for all these years, I had no idea what colour a finch might be.  I had to turn to my friend Mr Google.  What a revelation – they come in all sorts of colours, not just brown.  I had no idea that finches were so brightly-coloured!    Who’d have thought it?
I picked a bird that was a pretty shade of blue as my model and coloured in my digi to match.  Because I’d chopped the bird away from the branch, I put him to perch in some die-cut foliage, in front of a nice blue sky background - I stencilled a bit of Stormy Sky DI through a That Special Touch mask to give it a bit of interest. He was a bit lonely, so I gave him a friend - another good thing about digis, if I want my birdie facing left instead of right I can, very easily.
I printed the arch onto card first of all, cut it out, and gave it a coat of light Terra paint.  This is textured and opaque, so to get the detail back I printed it out again (without altering the size) onto tissue paper.  I added a bit of shading with alcohol markers (shades of warn grey) on the back and applied it to the previously-prepared arch with Mod Podge.  (I could have used gel medium, but the Mod Podge was handy on my desk).  I let it dry before fussy-cutting the arch – it’s not easy to handle soggy tissue paper, and by not cutting it too closely I had something to hold onto while I was wrestling it into place.
I assembled the project using cardboard tabs to support the 3d elements  And there are my birdies.  Thanks for visiting - I do hope you liked them!

Keren
Posted by Keren Howell at 09:00