I love, love,love playing with paper and card and making it look like something else.  For some reason,  the mock croc/faux lizard/leatherette look reminds me of the sort of things my mother would have had, 1930's style.
After making the mock-croc for last week's Sunday Stampers challenge, I had some left over.  Well, all right, I admit it, I got carried away and elsewhere in this blog you can see how some of my experiments turned out (and I'm not done yet!).  There was just enough to cover the lid of this little papier-mache box. 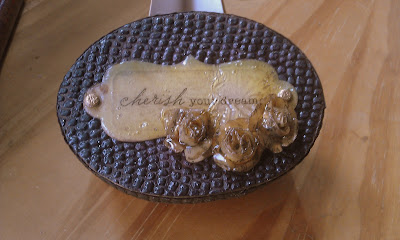 The sentiment is one of a set of digital downloads from Pink Petticoat, cut out with a Spellbinders die and coloured with Distress and Adirondack inks.  I glazed it with Glossy Accents, then promptly put my thumb in it- Aargh!  Attempting to put it right and then hurry the process with my heat gun got the result you can see;  I decided I rather liked it so left it as it was and rubbed some Walnut DI into it once it was fully set.
I almost never think ahead when crafting.  If I had, I would have attached the sentiment to the mock croc paper BEFORE I stuck it to the box - I'm not keen on bits showing on the inside.  Undaunted,  I dug out some round sticky buds, sprinkled the top with gold embossing powder and heated...voila, instant brads!

The roses were made using a Tonic punch (Janelle, I think it's called);  I got three flowers out of a strip of paper about an inch and a half wide that's been hanging around for ages but I couldn't bear to throw out.  I sprayed them with some Brushed Corduroy Distress re-inker, diluted with water, to antique them and once dry,  into the UTEE they went. 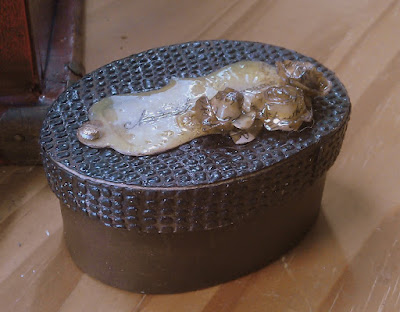 I brayered PVA over a strip if the same brown card that I'd embossed with the reptile-skin folder to create a "leather" look.  Word of warning - don't overdo the brayering, the card will split (and wrap itself around the brayer.  How do you think I know that?)

Told you I was hooked!! Love how a 'happy accident' has led to you creating such a lovely box lid. Perfect. Hugs, Buttons x