Hels Sheridan's Sunday Stampers challenge this week is "Patterns", so here's my chance to play with some of the background stamps I've accumulated over the years!  At the moment the harlequin pattern (from the Artistic Stamper) is one of my favourite stamps so it had to be used!  The tapestry pattern is going to be used in another project so it was handy - and you HAVE to have polka dots, it's compulsory. 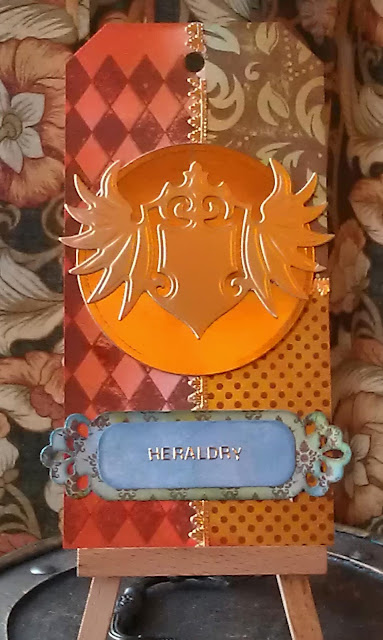 ﻿
It was all starting to look a bit heraldic, so I added some German scrap and some die-cuts.  And then the Love Of My Life said he thought it looked like something out of Hogwarts - I had Gryffindor red, Slytherin green, and Hufflepuff yellow, but I was missing the blue for Ravenclaw - so I coloured the label die-cut in blue.  Some peel-off letters - I know they aren't everyone's cup of tea, but they have their uses - and it was finished.  Hope you like it!﻿
Posted by Keren Howell at 20:54

Very clever Keren... love the whole Hogwarts thing... am just about finishing The Deathly Hallow's for the umpteenth time... Fab indeedily... thanks for joining in with the Sunday Stamper... don't forget to email me your addy hun so I can post your card x

Now this would make the perfect centrepiece for the front page of a family tree! Care - if you open that can of worms it can eat time too!! Hugs, Buttons x