Well, blow me down, I thought I was going to miss this one.  However, I'm not the only person who's had a heavy week in work (the exam went OK, btw) - Linda Ledbetter, who sets the challenges, has had a killer week as well so we've got an extra week. (Whew!).  This week's challenge was to include some Tissue flowers as shown in Sir Tim of Holtz's Compendium of Curiosities, Volume II, and is sponsored by The Funkie Junkie Boutique.

I admit that I have no Tissue Wrap on hand so had to make do with ordinary tissue paper which I stamped with Memento before making the flowers as described in the book, so the results probably would have been better if I'd used the real thing (oh, when will the austerity measures be over?)  I've learned that it is usually false economy to buy the cheap, just-the-same alternative when it comes to Tim Holtz products (buy cheap, buy twice). 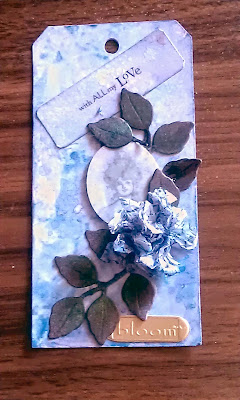 Apart from the flower, everything else was left over from a previous project so this was super-quick to put together.  The tag was meant for a Christmas project but wasn't quite the right colour; the leaves were made to go with the batch of rolled roses, the sentiment was one of a sheet downloaded from Pink Petticoat, die cut, then I went with another one on the sheet, and the medallion was a duplicate from another project.  Well, waste not, want not!  I might even use up all the bits in my scraps box ...(Yeah, good luck with that...)