The Love of My Life is up and about, the flu (and plague) having backed off a bit. He had nasty pains in his joints which have subsided, but is now sneezing. Apparently he had a virus in the fluid around his joints at the same time as he was coming down with a cold. The virus masked the cold symptoms then, as it got better, the cold took over. It could only happen to him....

Anyway, back to crafting. 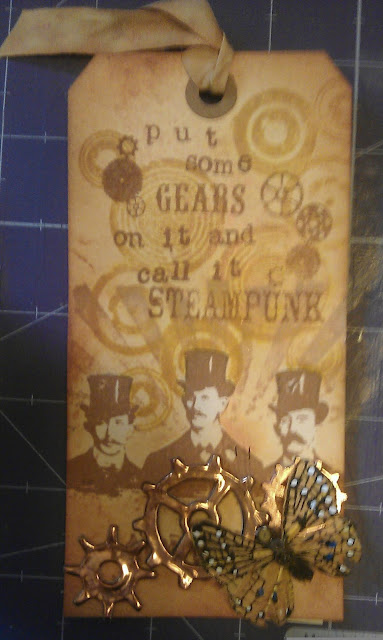 The three top-hatted men is just about my favourite stamp at the moment.  And of course, I am a steampunk fan.  So there you have it.

Hi, Just found your blog whilst "surfing" through blogland. I am a steampunk fan too, I absolutely love it. Love the tag! I've just begun making tags, I want to make various themes, but I think steampunk will be first! I have so many hobbies and interests, I do love to keep busy!
Love your other blog too!
Best wishes, Linda