Hels Sheridan’s Sunday Stampers challenge this week was inspired by the sad news of Robin Gibb’s passing.  The Bee Gees were part of the soundtrack to my youth.   My first proper, being asked to dance by a real boy, dance was to “Massachusetts”.  I bought “Gotta Get a Message to You” and played it until I almost wore it out.  “Words” is one of my favourite Bee Gees songs; no, let’s change that – it’s one of my favourite songs, full stop. 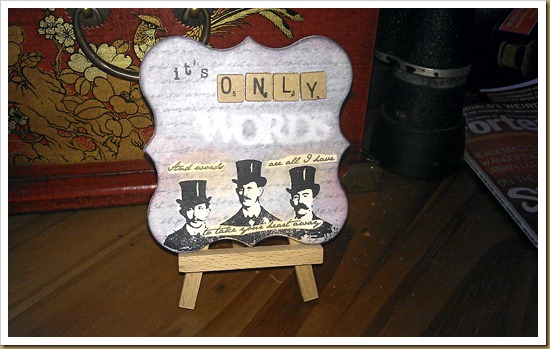 So I had to make something for this week’s challenge.  I began with a Stamps Away white chipboard label shape, and stamped and masked the three men in the foreground.  (The three top-hatted men could be the predecessors of the Bee Gees – sort of the Pre Gees.) (Sorry!)  I cut the “WORDS” stencil using my Cameo, and went over the whole thing with Distress Ink on Ink Dusters.  The script in the background was stamped in London Fog Memento.  Some word tiles from my stash, print out a phrase and the result is as you see it.

Pre-Gee's, that made me grin :O)) Love your entry, the colours are so pretty which goes so well with the chaps... Thanks for joining in with the Sunday Stamper x

wonderful! i love the colour inks you've used they have a sort of marbled look which is so gorgeous and i love the idea of the men being the pre gees! hugs Karen x

This is amazing, love the words, the men and your little joke - pre gees, very funny.....A x