Day 5 of the 12 Days of Creepmas, according to the Smeared and Smudged blog.  If you're following the hop in order, (see here for more about how to play!) you've arrived here from Airless Chambers.  If you're lost, or have come in halfway, you can go back to the start, or work your way through in any order - the blog roll is over there on the right.

If you've been playing along with the blog hop from the beginning, you may remember that on Day 2 I was inspired by Hogfather, a book by Terry Pratchett (which has also been made into a TV movie).  Today, we have the Hogfather himself (well, actually, it's the Death of the Discworld who is filling in for the Hogfather. 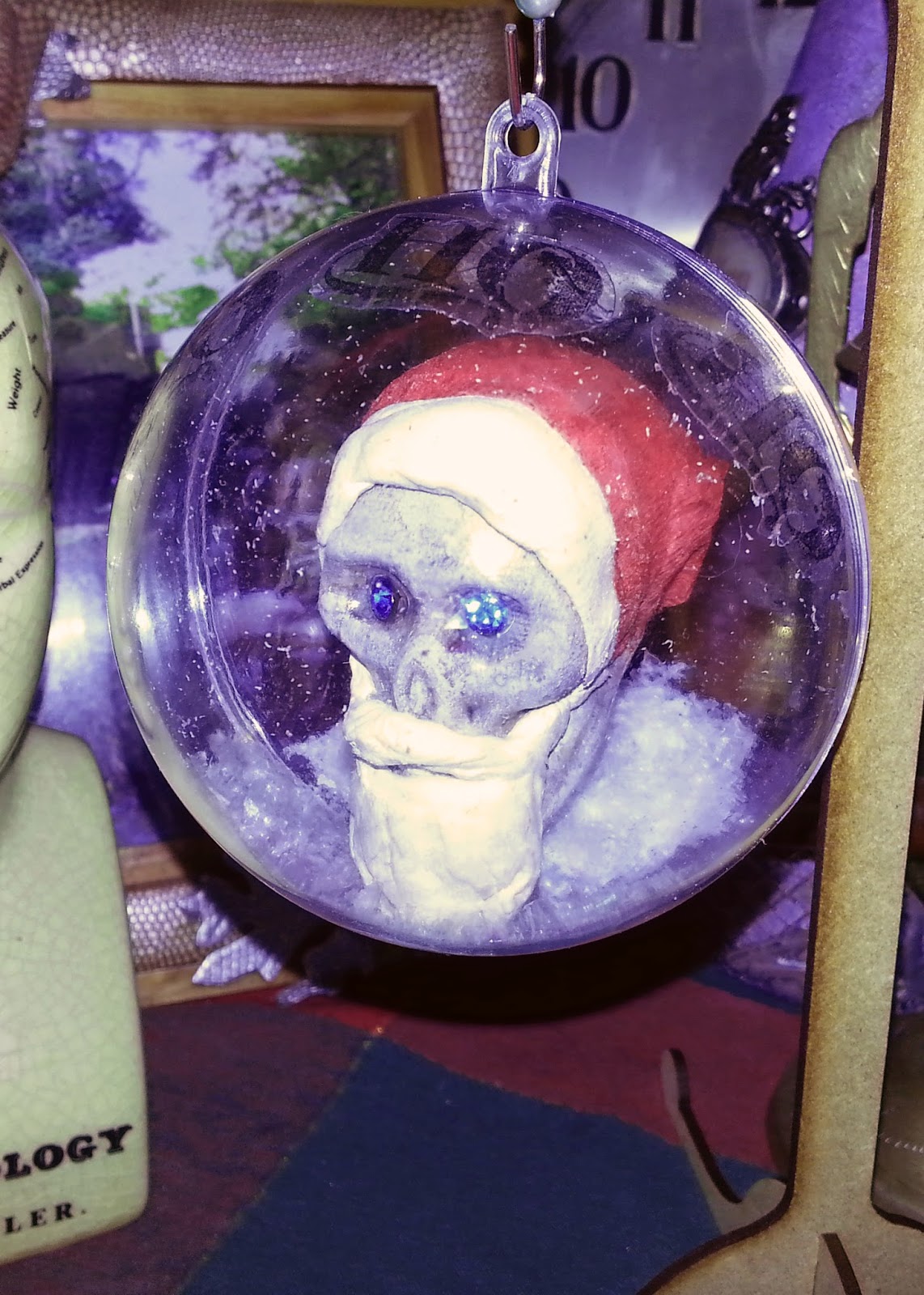 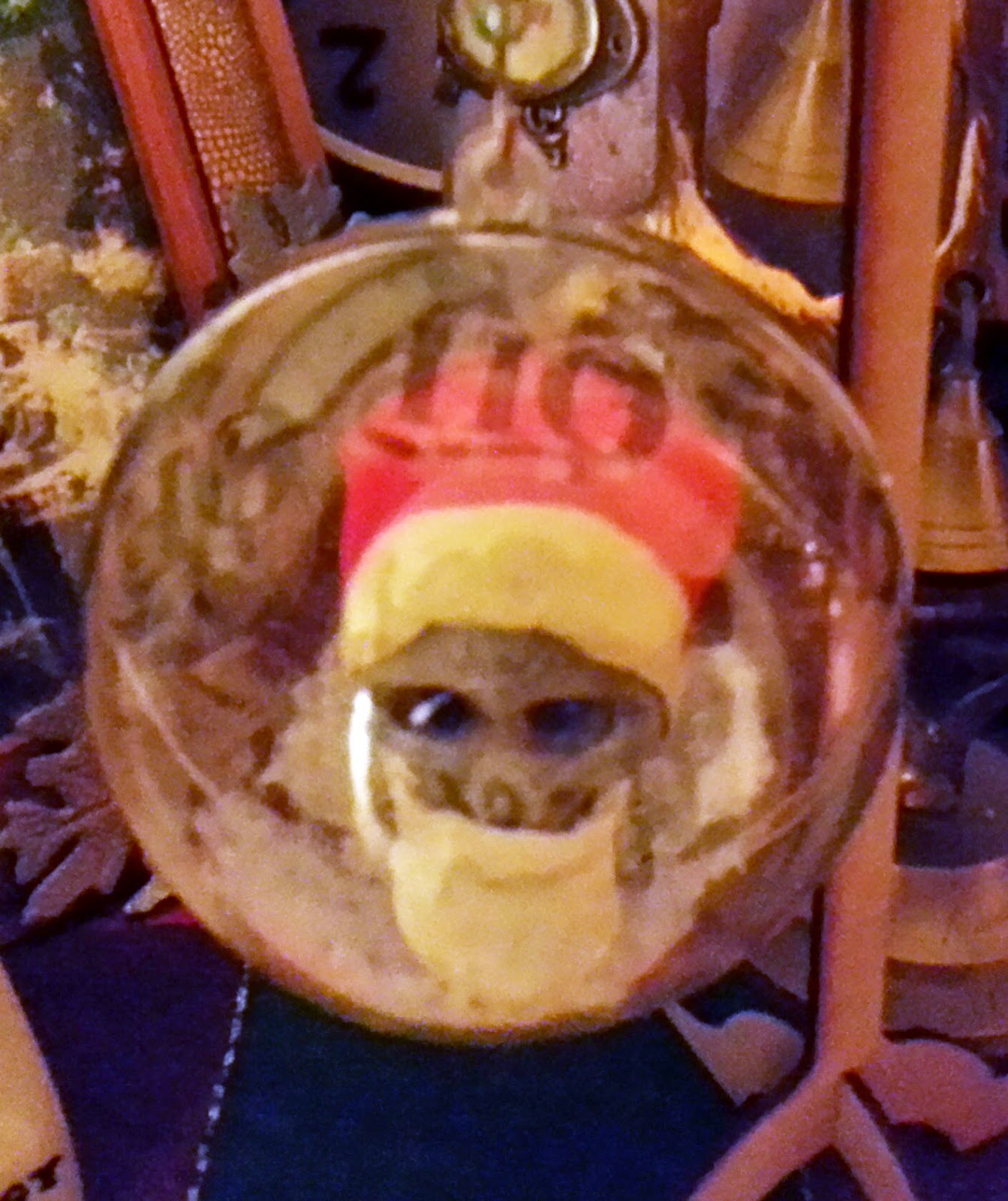 The plastic skull was antiqued for Halloween and never made the cut - but we don't throw good elements away, do we?  The beard and fur on his hat are Martha Stewart paper clay - there's an Amaco mould of faces (dolls, cherubs etc) and one of them is a Santa face.  While the clay was still soft I cut away the hat and beard (sorry Santa - hope I'm not on the naughty list as a result!)  and shaped them over the skull while they set, then glued them in place and added some red crepe paper to finish the hat.  The Death of the Discworld books has blue glowing eye sockets, so I stuck a couple of blue rhinestones in place.

Last month's Craft Stamper magazine cover mount stamp (by Visible Image) went to make the HO.  HO.  HO along the top of the bauble.  I stamped it onto cellophane (packaging material!)  and stuck it to the bauble with double-sided adhesive film scraps, left over from another project.  (I am not so much frugal as downright tight sometimes!)

I stuck the skull into the bauble with epoxy putty (the stuff they sell for mending pipes - I wanted a fast set, and Milliput takes a while to go off) which wasn't the most attractive look.  Once it was set I painted it white and stuck on some fake snow, as sold for decoration at Christmas.

It's now joined the Raven bauble and the Scary Fairy on my Christmas tree.

Today's bonus bit is from Hogfather.  Well, it had to be, didn't it?

I hope that you're enjoying the blog hop so far.  Off you go, now, to Sarah's blog. Thank you for visiting, and I'll see you on Dec 9!

Keren
Posted by Keren Howell at 07:00

What a dapper looking Santa skull! I too worry about messing with Santa and ending up on the naughty list...:( but maybe he has a sense of humor! Love the way you applied your sentiment have got to try that and nothing wrong with using something that is just gonna fill a land fill up! Wonderful job!!

What a super cool ornament! Totally creepy and I love the way you've added the sentiment. xxD

Wicked cool ornament! Love it! Such a pleasure seeing your art and reading your posts!~kim

Santa's beard is magical and will grow back quickly. As long as the balls you cut off were only on his hat, I am sure you will be forgiven.

Very clever ornament. I bet it's "mood" changes when seen in different lights.

Oh what a super Creepmas ornament. I remember the TV show Hogfather - it was super!

YAY, another nod to the Hogfather, I love it to bits! I really need to see this movie!

Fabulous! I just listened to the Hogfather audio book again after your references to it on Day 2. So many great lines, and your ornament is perfect for Death masquerading as the Hogfather to keep the belief alive :)