12 Days of Creepmas - What's so special about Robins anyway?

It's the second day of Creepmas according to the  Smeared and Smudged blog hop. If you're following the hop in order, (see here for more about how to play!) you've arrived here from Airless Chambers.  If you're lost, or have come in halfway, you can go back to the start, or work your way through in any order - the blog roll is over there on the right.

Today's offering features a Smeared Ink digi.  The set is no longer available as a digi, which is sad, because it's just SOOO easy to flip an image so that the raven is double-sided.  He's stuck onto some acetate (cut from packaging - regular visitors to this blog may be aware of my penchant for making use of packaging material) and then glued inside a clear bauble with a bit of fake snow.  Yes, he will be going on the tree when it goes up! 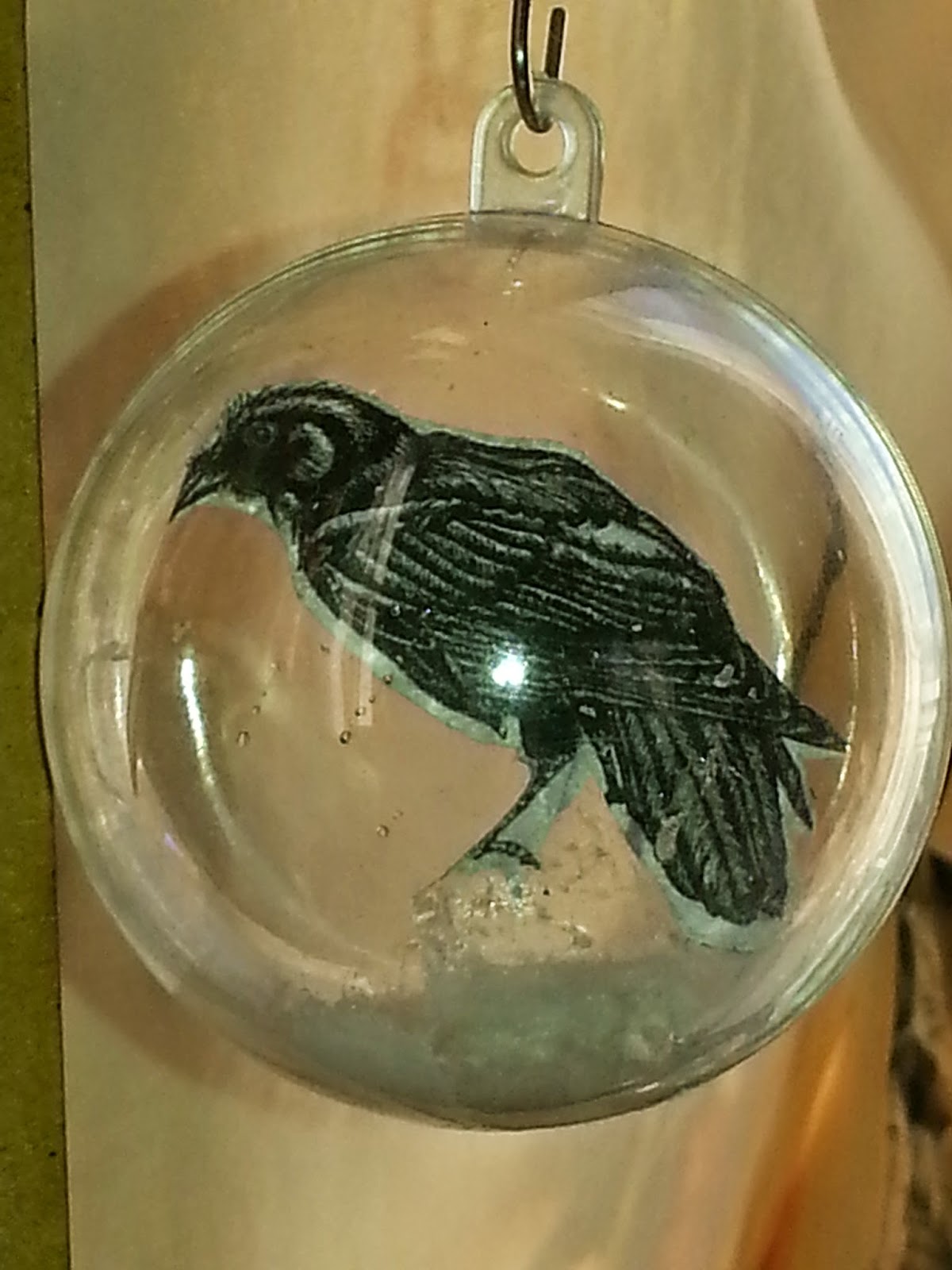 The inspiration for this deccie came from a book by Terry Pratchett, Hogfather.  It was also made for TV a few years ago.  In the book, a raven is employed by the Death of Rats to act as interpreter - the Death of Rats communicates by saying SQUEAK, which the raven, being a naturally occult bird, can understand.  It is a bit resentful that robins get to appear on greetings cards and ravens - don't.  The raven was cut from the programme, but Rat Death made an appearance, so here he is in today's bonus bit.
Hope you enjoyed - now, if you're working your way around the hop, it's on to Sarah's blog.  See you on December 5th!

Fabulous bauble, Keren! So wintery. Raven beat the heck out of robins (in my book, anyway). Love this and the fab little video. xxD

Love this ornament - so creative. Perfect!

Love your creative use of found materials.
Altho because of you I am saving more plastics rather than blindly recycling.

I like the look of bits of snow attached to the bauble wall.

Love your snowy ornament. The image is so wonderful! Creepy good!~kim

Creeptastic bauble, and it will look wonderful on your tree! I still can't watch the video (hubby and I are listening to a radio show) but I love Terry Pratchett, and I know the Hogfather book well :)

Love it! Would love a pendant like this....ohhh an idea! Love the snow and that is a fab digi!! Love it so much had to say it again:)

That's one brilliant bauble! And thanks for the extra bit!

Love this ornament! The raven has so much depth to him!

A fabulous raven ornament and totally worthy of hanging on your tree! Love Death Rat, I'm a huge fan of Terry Pratchett and did not know they'd made a TV movie, I MUST see it!